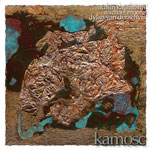 Kamosc is the first recording by Achim Kaufmann, Michael Moore and Dylan van der Schyff, three improvisers who are known to let their imaginations rove in their music. However, the name of the band is a more formal invention: they've taken the first two letters of their last names and strung them together.

This music was recorded during the trio's 2005 fall tour of Canada and the US. It goes into many spheres, but the basic compositional motif was created by Kaufmann based on the empathy they had created and shared over the years. The music can be edgy, intense or spare—and while there is melody and swing and some funky stuff, there is also plenty of abstract art that infuses the recording with not only depth, but unharnessed freedom as well.

Kamosc turns form inside out. It can happen in the way these players develop a tune. "Bouche Perdue has an instant sense of improvisation; Kaufmann explores the piano introspectively, van der Schyff adds shuffling accents on the drums and Moore brings in the clarinet, swaying sweetly, only to tweeter off into another domain to add sharp accents, before returning to the modulations of the melody and swing.

Wolter Wierbos adds impact on the two tracks he appears on. His trombone cries in anguish, sounds throttled, and lets loose only in a strangled cry. His dialogue with Moore on "The Cyans is low-key as the two circle each other; one animated voice comes from van der Schyff, who accents with authority yet sparingly enough so as not to tilt the mood. There is an Old World charm to "Blue-Brailled, where Moore glows on the melody. The use of time and space by this group is exemplary, especially when Kaufmann plays, his notes creating enticing filigrees, a solid amalgam of time and space.

Visit Achim Kaufmann on the web.