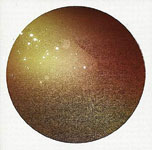 As a younger demographic increasingly accepts cross-pollination and challenges simple stylistic categorization, there's an increasing number of artists for whom defying boundaries has long since transcended conscious consideration and become, instead, an organic and completely natural modus operandi. Norway's Jaga Jazzist both regularly and successfully disregarded narrow confines and became, instead, something no longer resembling any of the markers that positioned it, while undeniably referencing the multiplicity of influences that made it such a popular group and launching pad for up-and-coming artists including trumpeter Matthias Eick and multi-instrumentalist Lars Horntveth. Horntveth's Pooka (Smalltown Supersound, 2004) was an engaging album of instrumentals, but Kaleidoscopic is a more profound effort—a 37-minute composition that, in its combination of acoustic and electric instruments and the participation of members of the Latvian National Symphony Orchestra, represents classical music for a new generation.

Horntveth's intention was to write a continuous piece akin to an ongoing diary, the result being a piece that shares little with the thematic continuity so often definitive of concept albums in, for example, the progressive rock community. Nevertheless, Kaleidoscopic demonstrates a flow that's equal parts Steve Reich's minimalism, Robert Wyatt's stylistic divergence, Stereolab's hypnotic, experimental ambient rock, Bernard Hermann's cinematic dramaturgy, and a taste of Bill Frisell's Americana roots music—all wrapped into a bundle equal to far more than the sum of its parts.

With 34 string players from the symphony orchestra, Kaleidoscopic is, at its core, based on a lush soundscape, although Horntveth's blend of pedal steel and harp lends its opening a curious oriental tinge while avoiding overt reference. Peaceful, with melodic tints to allow the music a freedom to explore any possible avenue, Horntveth also utilizes tuned percussion to create repetitive motifs that, when blended with consonant long tones, are trance-inducing despite lacking the iterative development so definitive in Reich's minimalism. And while some passages are clearly electronic in nature, they seamlessly mesh with the organic landscapes, feeling neither excessively artificial nor unnatural.

Rhythm-heavy percussion also features heavily in parts of Kaleidoscopic, even as soaring strings blend with finger-picked acoustic guitar, and even as a quirky combination of saxophone, tremolo'd vibraphone, and acoustic guitar lead into the piece's final minutes with a deceptively complex combination of contrapuntal ideation that's as evocative as it is cerebral.

Composing largely for orchestra while avoiding its stylistic pitfalls makes Horntveth's writing process for Kaleidoscopic a challenging one, as he ambitiously looks for new ways to utilize texture and stylistic ambience with centuries of preconception. In attempting to essentially create a new kind of classical music that, with its seamless integration of sonics not normally associated with it, Horntveth challenges its most glaring trappings, creating a work of great emotional depth that embraces tradition while relentlessly avoiding the beacons that set unnecessary expectation and precedent. Kaleidoscopic is a rare piece of music that sounds both familiar and new, intimate and beautiful while, at the same time, broad-scoped and expansive.