BY NENAD GEORGIEVSKI
December 18, 2004
Sign in to view read count 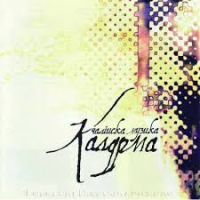 Kaldrma is an older type of stone road that was built throughout the Balkans Peninsula during the Ottoman rule. It is now regarded as a kind of a monument or a leftover from the past, a type of road no longer built, yet still trodden upon. Symbolically it was taken as a metaphor for a type of music (chalgia) that is no longer performed (at least not in its original form), yet still popular and part of our musical landscape. Kaldrma is a joint effort between two groups, String Forces and Pece Atanasovski Ensemble, two stylistically radically different bands. The first one is a well-known pop band that has their origins in pop/improv/jazz/electronica music, whereas the Pece Atanasovski Ensemble is a group that strictly performs traditional music.

The result of that is Kaldrma , a collection of eleven songs and reels that are usually referred to as chalgia. Provoked by the negligence towards the chalgia as a specific mark of the traditional urban Macedonian lifestyle, these two groups have decided to give their own contribution in order to breath new life and make new inroads into this invaluable part of the Macedonian musical heritage.

The chalgia is considered to be music that was played by chalgia groups and they were using instruments such as oud, canoon, tambourine, tarabuka, violin (referred to as kemane) and clarinet. All of this was merged into the so-called Old City Tradition, an urban style that emerged by the end of XVIII century and it reached its zenith in the XIX and XX century. These chalgia groups are a result of an urban music tradition from this period and it was a widely popular music in its heyday. When one refers to chalgia it usually refers to an older type of chalgia.

There are two styles that are prevailing in this tradition. The first one originates from secular Byzantine music and through classical Turkish music it synthesizes elements from the Orient and the Mediterranean, which are ultimately filtered through the rich musical tradition and life of the Macedonian people. The latter style of music is somewhat new and its beginnings can be traced back to the 1920's, still building upon the characteristic sound imagination manifesting itself not only within the frames of a single musical phrase, but in a wider context, thus enabling it to incorporate and express the spirit of the new century. According to its melodic and formal structure, this tradition is one of the most developed traditional musical forms that have existed in an urban setting. Both traditions have influenced and contributed to the sound of Kaldrma.

What is important when it comes to traditional forms is to be able to translate and put that ancient language into modern frames and form, rather than relentless copying of what old masters have already done. The first trait of Kaldrma's music that immediately captures our senses is it's radical originality, the surprisingly powerful, profound and suggestive sound that directly originates from a rich musical tradition. What is new about this formation (Kaldrma) is the use of other instruments as well, such as the kaval (Macedonian wooden flute), viola (instead of violin). There are moments on this release where the group sounds as much like a chamber orchestra as a folk ensemble, and it fulfills both roles exceptionally well.. The band plays with vibrant energy as well as smooth cohesion.

On this release they traverse through eleven tunes, including "Oj Zarino," "Antice, dzanam dusice" (Antica, My Sweet Soul) "Tri Godini" (Three Years). It is filled with too many instances of hauntingly beautiful music to name, from the gorgeous reflective "Dali znaesh Pametish Li Milice" (Do You Remember, Milica), "Sevdalino" to the rousing reels such as "Staro Kavalsko Oro" (Old Kaval Reel) and "Nevestinsko Oro" (Bride's Reel). Oro is a traditional reel or circle dance, very common in Macedonia. It is usually danced at wedding parties or other celebrations. In so many ways, this record is a celebration, a celebration of life.

As this record starts, you suddenly feel as if you are entering a Macedonian house on the night of the celebration of the family saint, a night when all guests are welcome. A celebration when the young dance the cheerful reels, when the old reminisce over domestic wine, when everyone is part of the family. As the last song echoes its final notes and you leave their "house," you feel as the band has taken you on a journey which maybe lasts an hour, yet it is timeless. This is a testament to their virtuoso musicianship and dedication.