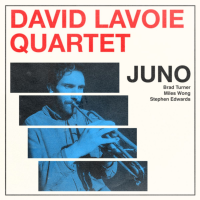 The experimental and avant-garde side of jazz can be incredibly rewarding and a whole lot of fun, whether delivering the adventurous dynamics of a Sun Ra epic or a maelstrom of dissonance at the climax of an Angles 9 track. But, despite the value of risk-taking and innovation, straight-forward and focused jam albums will always have their place, as trumpeter David Lavoie and his band clearly know. Despite a few rough spots, Lavoie's debut with his quartet, Juno, is a warm blanket of an album, delivering a relaxing collection of catchy compositions, lively solos and gorgeous production.

North Vancouver-based Lavoie first released music with his quartet in 2018 with Demos, a collection of four roughly-recorded live performances, some of which appear as fully realized tracks on Juno. Two years later and in the context of a studio album, the David Lavoie Quartet sounds incredible, although the group's dynamic can sometimes fall out of balance. Although the band is named for Lavoie, pianist Brad Turner steals the show on most tracks with his energetic and creative performances.

After Lavoie's trumpet and Turner's piano lock into the same melody in the opening of "Square," Lavoie coasts between motifs and eases between different tones in a performance which is perfectly serviceable. But the song gets so much more interesting when Turner takes over, quickly repeating melodic ideas between little breaks for solid chords in a thrilling and effortless solo.

Even when Lavoie delivers a standout solo, the quartet's chemistry can still seem a little off. "The Grouch" delivers one of Lavoie's best performances, with his trumpet gliding over the busy drums and steady walking-bass line before Turner comes in for a predictably excellent solo. Eventually, bassist Stephen Edwards lets the song down with a solo which meanders and almost kills the song's momentum before Lavoie returns for the final chorus.

The quartet doesn't always complement each other as well as they should but, when they all lock in and play to each other's strengths, they create some pretty special tunes. On "Masculin Féminin," the group's fantastic performances and Turner's clear production, mixing and mastering have wrung all the untapped potential out of the original 2018 demo. The patient bass line, light drums and heavy piano chords all set a palpable melancholy mood for Lavoie to soar over with a relaxed, subtle solo.

Although the David Lavoie Quartet's chemistry can be awkward in a few rare moments, Juno stands as a fantastic testament to their talent and a sign of a bright future if the band expands their sound and consistently brings the best out of each other.