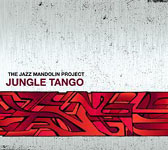 The Jazz Mandolin Project may be touted as a cutting-edge band exploring new instrumentation and sonorities, but after listening to their new album Jungle Tango several times over the last three weeks, I don't hear it. What I do hear is an ensemble with inspired interplay, all fine players, and yes, there is a mandolinist—band founder Jamie Masefield—in the group.

The band is based around a nucleus of acoustic bass, drums, and mandolin with additional contributions by Gil Goldstein (accordion and piano) and Chris Lovejoy (percussion) on various pieces. The pieces where Goldstein joins the ensemble represent the strongest work on the album, making a far greater impression than the other pieces. The 'Goldstein' ensemble pieces are much more interesting from a compositional/improvisational perspective, while the others tend more towards extended improvisations based on grooves and predictable harmonic structures.

Either perspective works depending on where you're coming from; folks coming from a jazz point of view should find plenty to enjoy on "Jungle Tango," "At The Pershing" (with a wonderfully complex piano performance by Goldstein), "Proust," and "Reich's Boogie"; and folks coming from a Grateful Dead "Dark Star" perspective will love the jam sensibilities expounded on "Freddie," "Ipanema's Sister," "Oh Yeah," and "Pointillism." The cool thing about this band is that they offer both, and like the Grateful Dead, they are something to catch live on stage.

To his credit, Masefield expands the sonic possibilities of his instruments by using tone- modifying devices normally associated with modern guitar players (wah-wah pedals, etc.). Another strength in this recording is the way it conveys this group's sound in a live performance. Ironically, this trait is also the album's greatest weakness.

In the end, Goldstein's contributions to this ensemble bring forth the 'missing link' this album needed to break out of its formula. Maybe this is due to his years of work with the likes of Pat Martino, or maybe it's because he represents more of an outside element, less familiar to the jam- band sensibilities than his cohorts. Whatever the reason, the ensemble is playing at a different level on these pieces— they shine and sparkle in comparison to the rest of the album.

Stylistically, it's obvious these guys have big ears; they add elements of jungle breakbeat drum patterns, electronic-tinged mandolin sonorities, or straight-ahead jazz to the mix on every piece. Speaking of mix—its also obvious that Masefield and crew put a lot of thought into the way this album sounds, and I like the direction they chose in that regard.

The Jazz Mandolin Project continues to grow and develop with each new recording. This album is no exception to the concept of group evolution, but I can't say it's ground-breaking in terms of the evolution of modern jazz. It is a nice solid album and should serve as an inspiration to aspiring mandolin players looking to break out of the American-style traditional role of the double-coursed little jewel. (And while you're looking...check out John Abercrombie's mandolin work with Jack DeJohnette's New Directions band from the late '70s.)