By Duncan Heining
November 5, 2013
Sign in to view read count 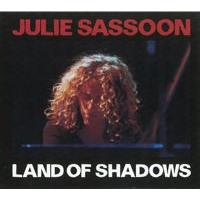 Land of Shadows is British improvising pianist Julie Sassoon's second solo CD and her first for the German jazzwerkstatt label. Recorded live in Cologne and at the famed Bauhaus theatre in Dessau, the record marks both an consolidation and an advance on its predecessor, New Life (2006 Babel).

Where New Life drew its energy from the joy of first motherhood, Land of Shadows explores a darker world of experience. Sassoon moved to Berlin a few years ago and the move has encouraged her to reflect on her own family's history, as German Jews fleeing persecution but also losing family members to the Holocaust. Necessarily sombre and at times infused with a mood that is almost claustrophobic, the music is nonetheless as reflective and vibrant, as it is powerful and dramatic.

"Just So" opens with its limpid melodies, as if unable to comprehend what will follow."What the Church Bells Saw....," on the other hand, somehow succeeds in finding moments of calm within a tune that otherwise serves to increase the listener's sense of foreboding. The album includes a DVD performance of this track from Berlin's Neue Synagoge, which is not only quite different but also even more profoundly questioning in its eerie, keening harmonies.

"Forty-Four," featured on New Life but appears here in a new guise that seems to extend its Steve Reich-like forms into ever more intricate patterns. If there are two obvious influences at play here—and elsewhere—it is Reich and Egberto Gismonti. An odd pairing perhaps at first thought, but Sassoon combines and transcends both influences to deliver a music that is both multi-layered and free-flowing. "Land of Shadows" follows with its miasma of staccato notes and circling melody lines becoming louder and louder, as escape becomes harder. "Shifting" has a cinematic quality to it, evoking pictures of an awkward, clumsy ballet. In fact, Sassoon's pieces often seem to suggest or seek a physical expression. To my knowledge, she has not as yet worked with dancers. If not, it is certainly something for her to explore.

At the heart of Land of Shadows is the final track, "New Life." Less expressive now of the joy of bringing a child into the world, it has become more a wider expression of motherhood, acknowledging that in darker times or circumstances, historically or in the present, it carries with it both a mother's hopes and fears. At times, the music here seems so intense that it might implode. There is a moment towards the end of the track where it very nearly does so. An ominous, dissonant chord simply hammers its way out of the instrument, as if to ask the most damning question of all "Why?" The fact that it can be asked at all and that we too want answers is a message for all humanity.

Land of Shadows is a wonderfully rich and beautiful record. It's also a very brave one that succeeds in taking its message beyond the personal into areas both more spiritual and profound. And, most importantly, its form, its content and its performance combine to tell its story of suffering and transcendence. This is its inner core, its strength of purpose and meaning.