By EYAL HAREUVENI
August 16, 2014
Sign in to view read count 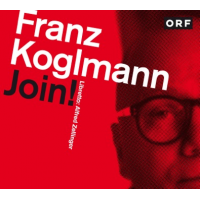 Austrian, Vienna-based composer Franz Koglmann always used music as a means to present his ideas, often provocative perspectives, on cultural phenomena at large. He alienated the American jazz community with A White Line (hatART, 1990), where he sketched an alternative history of jazz based on white innovative musicians. Later he reconstructed the compositional ideas of Johan Strauss to modern jazz vocabulary on An Affair with Strauss (Between the Lines, 2000) and upstaged the poems of T.S. Elliot on Fear Death by Water (Between the Lines, 2003), among many other projects that offered Koglmann's highly original ideas on poetry, theater and cinema.

Join! is an expansion of past ideas, mainly his critical view of the American, corporate-based, market-focused, consumerist culture. Everything— including personal experiences, emotions and sex—is commodified, tagged with a price, and wrapped up as hollow life style with shallow buzz words recited by disciplined salesman. Koglmann devised a musical, operatic play with playwright Alfred Zellinger who wrote the libretto (sung in German and English}, expanding Zellinger's successful play "Spiel der Konzerne" (Game of Corporations).

The sarcastic plot tells the story of a computer corporation, Gen & Brain, that is about to introduce a sensational new product, an implantable microchip which enables its carriers to be online any time, turning them into a kind of globe-spanning "brave new Join! world," a social network without any cumbersome hardware. Obviously, these corporation managers and salesmen are characterized with repulsive hubris who abhor the very notion of privacy. But Koglmann and Zellinger also criticize the roles of non-governmental organizations (NGO's) in legitimizing the takeover of global corporations, who often donate small margin of their huge profits to art, environment and human-rights causes, and also of the rise of American chauvinistic puritanism.

The music of this play— featuring seven opera singers and the ensemble "die reihe," including Koglmann on flugelhorn and trumpet and his musical pertner in many of his projects, double bassist Peter Herbert—like on previous Koglmann compositions, feature his inclusive, subversive perspective of the jazz legacy. Koglmann blends organically jazz elements with European modern, cabaret elements, as well as numerous motifs of pop and rock n' roll songs, soundtracks, rap and popular jingles. This playful yet experimental post-modernist pastiche of countless references of popular culture, used as a means to seduce the listener/viewer to the Join! messages, often lose its ironic and comic edge and sounds like a high-brow, condescending European look on almost any expression of American culture. The rich, nuanced musical envelope can not contain all the drama on stage and the thoughtful aesthetics of confrontation, covering cozy sounding music with irritating, threatening acts.

Still, Koglmann and Zellinger's sober, sweet-bitter criticism of corporate-based cultural capitalism (a term of economic and social theorist Jeremy Rifkin) may challenge us to reevaluate this new form of sophisticated slavery. In its detached and cool framing of the cons, outnumbering the pros, of this hi-tech, supposedly smart technological revolution, these disillusioned words and music warn us of numb and passive compliance to such innovations. These innovations will not necessarily advance us to an enlightened era, but more likely to a conservative one, less open and vital. This notion may be their great success. After all, resistance and subversive acts can begin with humor, irony and a laugh.