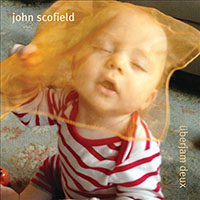 It's been a decade since Up All Night (Verve, 2003), John Scofield's second and, at the time it seemed, final album with his Überjam band, a group of younger players who, following his earlier forays into the territory—1998's first meeting with Medeski Martin & Wood, A Go Go (Verve), and the larger-casted Bump (2000)—placed the guitarist smack dab on the jam band map with a combination of viscerally accessible grooves and oodles of solo space to focus on his more soulful, blues-tinged side. Still, regardless of context, Scofield has always possessed a singular ability to push even the most seemingly conventional blues line outside the box—and the precise intuition to know exactly when to reel it back in.

Dispensing with the horns and woodwinds that distinguished Up All Night from its predecessor, Überjam Deux is a more logical follow-up to the group's 2002 self-titled Verve debut. Scofield's reunion with guitarist/sampler Avi Bortnick demonstrates, once again, the true importance—and often underestimated and undervalued skill—of an exceptional rhythm player. Scofield's relentlessly inventive, sonically expansive improvisational explorations are key to Überjam Deux's success, but so, too, is Bortnick's support, which ranges from chunky chords to snaky, muted single-note lines that almost subliminally anchor the music. Former Gov't Mule/Black Crowes bassist Andy Hess—who replaced Überjam's Jesse Murphy on Up All Night—is back, as dexterous, muscular and solid as ever, as is original drummer Adam Deitch, who handles the lion's share of Überjam Deux's twelve tracks with similar aplomb, though 28 year-old drummer Louis Cato takes over on four tracks and is equally impressive.

The biggest surprise is keyboardist John Medeski's participation on half of Deux. Mixed, at times, so in the weeds as to be more felt than heard (the funkified "Boogie Stupid"), elsewhere playing a more dominant role (the reggae-tinged "Dub Dub") and occasionally adding some psychedelic mellotron tinges (the fiery "Curtis Knew," with a heavily effected Scofield adding his own acid flashbacks), Medeski is largely there for color. Still, on these studio concoctions, Medeski substitutes a broader palette for what will, no doubt, be more exciting and extended jams as the quartet hits the road for summer and fall touring.

What distinguishes Deux is the writing. Sure, the largely original material—much of it collaborative between Scofield and Bortnick—is intended as a launching point for some serious jam activity, but there's greater depth this time around. Not that Überjam was light, but Deux's greater emphasis on arrangement (especially the scored interaction between the two guitarists) and songs that reflect both guitarists' broader interests—like the appropriately titled, soul-drenched "Al Green," the Afrobeat-informed "Snake Dance" and, well, shuffle-driven "G.P. Shuffle"—will give Überjam Deux greater longevity over the long-haul.

Speaking of longevity, it also demonstrates that, in any context, Scofield's work is inimitable and instantly recognizable. He may shift gears on a regular basis—his last three recordings ranging from a very personal look at ballads on A Moment's Peace (EmArcy, 2011), to a large ensemble revisitation of his repretoire in collaboration with composer/arranger Vince Mendoza on the enigmatically titled 54 (EmArcy, 2010), and a vocal-driven visit to gospel/New Orleans territory on Piety Street (EmArcy, 2009)—but taken as a whole, and now with the addition of Überjam Deux, it's increasingly clear that no matter what the focus, every Scofield album sounds like it could come from nobody but Scofield. As he enters his early sixties, Scofield has reached that point in his career where he can follow his muse and still retain what's made him one of modern jazz's most influential guitarists, with the kind of lasting significance that truly speaks for itself.