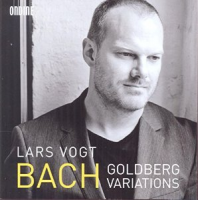 With widely performed compositions, I will usually listen to closely to the introductory section to begin formulating my thoughts overall. Consistently, I do this with Handel's Messiah, paying close attention to the opening Sinfonia. Its pacing and grandeur often give clue to what is to come later in the oratorio. Likewise, in Bach's Goldberg Variations, I will listen to the opening "Aria" and closing "Aria da Capo" with an interest in what it reveals to me about the work as a whole. The "Aria" is the slowest piece of the overall variations, capable of being gently caressed or emphatically commanded. It can also be heard as the soundtrack to countless funeral home commercials and, most notably, the infamous cage scene in Jonathan Demme's Scilence of the Lambs (Orion Pictures, 1991). Hannibal Lecter specifically requested Glenn Gould's performance.

In the interest of full disclosure, The two Goldberg performances I most favor are Murray Perahia's 2000 edition released on Sony and Andras Schiff's second recording on ECM (2003). From beginning to end, these performances are the best balanced. Their respective arias are treated similarly by the two pianist: the tempo is slow to moderate with the performances expressing a sweeping sumptuousness that is the product of mature and commanding performers. These necessarily lack the intensity of Glenn Gould's iconoclastic and enigmatic 1955 recording. Gould's 1981 reprise was much more in keeping with Perahia and Schiff's versions.

All that said, why on earth would anyone wish to hear a new performance of the Variations? The market is simply clotted with perfectly listenable versions already. The simple answer is: to detect evolution. Music Compositions are given birth by the composer, but it is the interpreter that molds the conventional wisdom of the piece, based upon what he or she has previously heard or studied. In his new performance of the work, pianist Lars Vogt takes a middle-of-the-road approach with the aria, making no effort to instill Romanticism. It is moderately paced and played freshly so that the notes almost shimmer as a reflection in water. The closing aria is more introspective and slowly paced. It is slightly longer than the opening performance (3:59), clocking in at 4:13. It exists as reprise and summation of the variations, a quiet closing of the door on the performance.