By Kurt Gottschalk
December 17, 2005
Sign in to view read count
Pity the poor bull fiddle. It's taken over from the tuba as the anchor of most jazz groups, yet when its turn comes to solo it's often seen as time to chat or go to the bathroom. It more than has the range of the saxophone or guitar, but the low tones demand greater concentration to follow. Still, two of its finest players have dedicated themselves to solo performance. 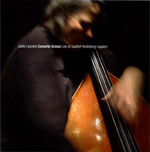 French bassist Joëlle Léandre has devoted much of her career to solo performance and Concerto Grosso is the latest in a line of unaccompanied releases. Like Derek Bailey (with whom she's recorded) or Cecil Taylor, Léandre has developed a language on her instrument that is dense and easily recognizable as her own. Her long bowing and percussive approach, coupled with her expressive vocalizing, are distinctive and deeply evocative. The Gasthof Loppem recording—released by the Belgian Jazz Halo label—captures two January 2005 sets across two discs (totaling 87 minutes). As with Bailey or Taylor, it's difficult to take her playing apart or to rank her performances against each other. She tends—here and in general—toward shorter improvisations; the fourteen pieces here never break the ten-minute mark. The recording is close and personal and the performance beautiful. Leandre is an artist who can't be known without being heard solo, and Concerto Grosso is an excellent place to start. 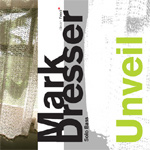 Where Léandre's playing is rich and earthy, Mark Dresser has built his instrument into something almost otherworldly. With pickups embedded in the neck, his bass is loud and hyper-sensitive. Unveil—released by the Portuguese Clean Feed label—is his first solo recording with the new wiring and it's strangely striking. Overtones and finger-hammers come through on level with the more usual playing, making it sound like a multitracked recording—or perhaps like being inside the big viol. Where this comes through most strongly is on the title track, remixed by Raz Mesinai (who also produced the disc). Oddly it's one of the simpler tracks on the album, as if to point out the richness that the wiring and Dresser's playing affords.