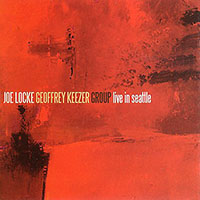 As can be the case on special occasions, this live recording is ripe with sonic excitement, spontaneity, and the ubiquitous impression that something extraordinary is happening right before one's ears.

That undoubtedly was the feeling of those who filled the Mars Hill Church on November 19, 2005 for the third annual Ballard Jazz Festival's headline concert. The wow factor, in full force at the start of the show, had morphed into an I-can't-friggin-believe-what-I'm hearing phenomenon by the end of the night, as a normally subdued Seattle jazz audience found itself hooting and hollering as if the Seahawks had won the Superbowl.

Six tracks of original compositions (plus James Taylor's "Native Son ) are captured here—three by Locke and three by Keezer—creating an enjoyable yet intricate challenge to listeners who attempt to name the composer of each tune without peeking at the credits—so similar are the musical visions, so subtle the thematic differences that separate Locke's and Keezer's writing for this group.

Although the pair previously recorded and toured in Japan, the 2005 Ballard fest marked their U.S. debut together. It was also the first time this quartet, with Pope on bass and Gully on drums, performed as a unit. Yes, thankfully, there's a first time for everything, making it possible to imagine the following game of Locke-Keezer cell phone tag occurring a few months before the gig:

Beep..."Yo Keez, Joe here. I've got this sound in my head for a band. It's a free-wheeling, high energy, jazz-fusion jam kind of sound with elements of reggae and funk and everything else all up in the mix. A real tight and loose electric acoustic quartet that's not afraid to cut loose and get the party started! So, uh, call me. Beep..."Joe, I'm hearing the same thing—kind of a Seventies vibe with a 2005 twist. I'll put in a call to Stanley Clarke and Billy Cobham, but just in case they can't make the rehearsals, how about Mike Pope and Terreon Gully?

Locke's "Van Gogh by Numbers is perhaps so named after the tune's highly syncopated odd-meter (15/8) in the first section. It features Keezer playing electric keyboards, Pope on bass guitar and Gully beating out more drum kicks, snare punches and cymbal crashes than Jackie Chan in a Zildjian warehouse.

Keezer's "Fractured has the pianist seated at the Steinway offering, in unison with Locke's vibraphone, a splintered harmonic progression of accented triplets over a shuffle rhythm. This build up of tension is released into a swinging solo section initiated by Locke, whose innovative playing shines as bright as anywhere else on the recording.

"Tulipa is another Keezer creation—a loping reggae rhythm supporting a cyclical minor chord progression that builds with the force of a great river flowing steadily toward a precipice and over the edge via breathtaking solos from Locke and Keezer.

The last tune is Locke's, titled "The King (For T.M.) The dedication has roots in an Oriental melody played briskly over a diminished scale, conjuring to mind those Chinese bonnets Monk was fond of wearing. It's the highest energy piece of the seven and a showpiece for Gully, whose blistering Latin rhythms burst into sweltering swing. The engine that drives the band, his is a massive drum sound that fills space Einstein could not have imagined.

Afterwards, one hears the crowd go nuts. Grown men and women act like little kids and, in their music-inspired reverie, forget all about rushing to their cars to beat the traffic home.