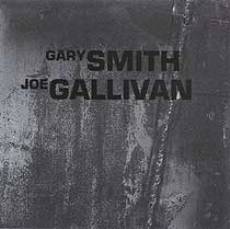 If the mark of a great player is that you can recognise them from just one note, then look no further than Gary Smith. His electric stereo guitar sound is as distinctive as the sound of Miles, Getz or Hendrix, as individual as DNA. Using real-time electronics and pedals, Smith has the capacity to bend, shape and move notes in the air. (It is no coincidence that he has given past solo guitar pieces titles such as "Slab," "Spirals" and "Curves." He thinks in terms of shapes.)

Here, Smith is paired with Joe Gallivan, most famous for his work with Gil Evans, Love Cry Want, Charles Austin and Elton Dean. Gallivan's electronic percussion and Moog synthesiser provide a good foil for Smith's guitar. Starting with Gallivan's bombastic, Phantom-of-the-Opera-style opening chords, it is clear that Smith and Gallivan are enjoying themselves. Across the eleven fairly short pieces (longest seven and a half minutes), there is a great diversity of mood here, from rock-influenced, fuzz-toned workouts through to spacey, swirling atmospherics. When both of them are playing at full-tilt, they make a lot of music for two people. At times it sounds like four or five players are at work here—and it was all recorded live to DAT with no editing, overdubbing or trickery.

Keen-eyed fans will recognise Gallivan and Smith as two thirds of the trio Powerfield (with third member Pat Thomas on live electronics), whose EEE album on Paratactile was one of the delights of 2000. This session was recorded the day before EEE, as Smith and Gallivan were getting acquainted. As on EEE, the sound crackles with electricity throughout, but the absence of Thomas's sometimes surreal interjections makes this album more predictable. Once Smith and Gallivan find a groove, they tend to stick to it. If you can only get one of them, pick EEE. If you already have EEE, this complements it well.