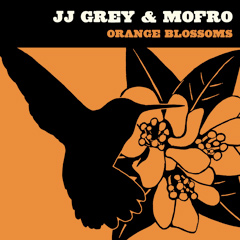 JJ Grey and Mofro's Orange Blossoms is a natural evolution from its predecessor, the ambitious Country Ghetto (Alligator, 2007). Here Grey and his regular road band extract the R&B/soul elements and artfully expand upon them.

The title song is emblematic of the way Grey uses imagery from his Florida heritage as a means to telling a story: "orange blossoms" is a trigger to remembrance as much as a sign of the south. A crisp electric piano interlude presages the entry of horns as a melodramatic background on the track, much as the way Grey's harmonica work precludes overemphasizing the mystical bent of "Dew Drops."

The delicate balance that makes these tracks work no doubt resides in the long-standing working relationship Grey and MoFro have maintained with producer Dan Prothero (who has worked on every Mofro album to date). Of course, that wouldn't mean much if material like "The Devil You Know" didn't contain a twist on the familiar aphorism, Daryl Hance's tartly plucked guitar wasn't accurately placed and the background vocalists didn't restrain themselves enough.

JJ Grey never becomes too intellectual for his own good. "Everything Good is Bad," for instance, finds him singing so emotionally the feeling enlivens the words rather than the other way around; then, as the lyrics progress from a testament to personal temptation to a more universal observation about materialism, a swell of Hammond organ from Adam Scone opens the way for a majestic pump of The Hercules Horns (Dennis Marion on trumpet, Art Edmaiston on saxophone and Clay Watson on trombone). A similar turn of arrangment extends "Move It On" to close to seven minutes in length with no loss of dynamics.

"She Don't Know" is adorned with violin and cello that effect an insinuating mood, and Grey sings as if telling a secret, his own understatment indicative of how skilled a singer he's gotten to be. The track avoids going soft at the center partially by dint of Anthony Cole's rock-solid drumming in a modified martial rhythm.

Strings appear even more prominently on "The Truth," its portentous intimations carefully undercut by the simplicity of the lyrics and the means by which orchestration and horns dovetail up and round Grey's straightforward vocal. JJ Grey and MoFro have always taken their studio recordings seriously and the transition from the shadowy likes of that track to "WYLF" demonstrates how much they've learned in seven years of recording. Wah-wah guitar bounces in time to electric piano to signal a lighter mood reflected in the whimsical title as well as a more extensive instrumental passage.

Mofro's original direction as an idiosyncratic take on the blues—as on Blackwater (Alligator, 2001) and Lochloosa (Alligator 2004)—bears slight resemblance to the current trajectory of the group where the shadow of Otis Redding is ever-present. Nevertheless, the pure pleasure the band takes in playing, during the breakdowns of "On Fire," for example, reveal no self-consciousness about roots precisely because they're too absorbed in connecting with those roots. That said, it's important to note the most obvious points of reference are utterly contemporary: the Lowell George-led Little Feat second-line rhythm on "Move It On," Creedence Clearwater Revival in the elemental guitar of "Ybor City" and Sly Stone for the horn tease on "Higher You Climb."

JJ Grey and Mofro are clearly conscientious students of musical history and the clarity of purpose that permeates Orange Blossoms is as much a deliberate decision as the result of careful craft. "I Believe (In Everything) might seem precious if Grey didn't proffer it so matter of factly on this closing cut, as a simultaneous reaffirmation and benediction to all that's come earlier.

Tracks: Orange Blossoms; The Devil You Know; Everything Good Is Bad; She Don't Know; The Truth; WYLF; On Fire; Move It On; Higher You Climb; Dew Drops; Ybor City; I Believe (In Everything).