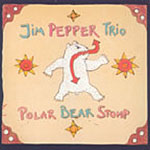 How fitting that Jim Pepper's friend and professional associate Horst Weber remembers that it was by impressions that Pepper wanted to be remembered. For Impressions is one of John Coltrane's best known albums, and Coltrane was one of Pepper's biggest influences.

There was a time when, if someone had asked me, "If you could listen to only one song for the rest of your life, what would it be?", my answer would probably have been "Greensleeves". Not the old folk rendition, and certainly not the version co-opted for Christmas caroling. When I said "Greensleeves", I meant the only version of it that I knew at the time—the tune as re-imagined by Coltrane in 1961 on Africa/Brass.

The song's journey from Africa/Brass to Pepper's Polar Bear Stomp took over forty years. For a long time, Coltrane's was the only version I knew. I was overwhelmed by the melody, by the arrangement, and by the group's playing of it. For a long time, it was easily my favorite song, of any musical style, any musical period.

Coltrane called it "one of the most beautiful folk melodies I've heard." On Africa/Brass, Reggie Workman's ground-shaking bass opens with an almost singable rhythm, sounding at times like he's harmonizing with himself; then Coltrane swings in with what he called a straight playing of the folk structure. McCoy Tyner's cleanly crafted, lyrical solo embodies the ageless "Greensleeves." And of course, there are Elvin Jones' unrelenting drums powering through it all. When Coltrane pushes into the higher ranges, he's daring us to stay with him, to stay with the song, right into its primeval source—the primeval source of all song. It's a perfectly crafted work, a masterpiece.

Which brings us to Pepper's Polar Bear Stomp. One of his last recorded performances before cancer took him in 1992, it was recorded in 1991 at the Miles Smiles nightclub in Vienna (but not released until 2004, by Universal Music in Austria). The set's version of "Greensleeves" is clearly Pepper's way of giving a nod to Coltrane.

This is the dark twin to Coltrane's "beautiful folk melody". It opens almost self-effacingly, with bassist Wayne Darling taking his time to draw us in. The audience is talking and laughing, as if they think Darling is just noodling, waiting for Pepper and drummer Bill Elgart. You can hear Pepper wise-cracking in the background.

After about a minute and a half, the mask is torn away and the bass line suddenly mirrors Workman's intro from the Africa/Brass session. You can actually sense the shift in the atmosphere when the audience realize what's happening. It's a grainy mirror, though, with cracks and sharp edges. There's no McCoy Tyner, in fact no piano at all, to lull us. After Darling's earthy opening, Elgart bursts right in, as if with a vengeance, and definitely with no apology.

And then wham!—Pepper leaps in, landing with a crash and a joyfully erupting soprano. He brings us, like Coltrane before him, right to the primal source. It's a different song, and it's the same song. It's quintessential Jim "Take No Prisoners" Pepper, and at the same time it's the song Coltrane described as "adventurous and lyrical."

It's now more than thirty five years since I first fell for "Greensleeves", and the song is still on my short list of classics. But next time someone asks me what one song I'd want to listen to forever, I'll have to answer, "Define 'one'."

Bill Siegel, of New Hampshire, maintains the Web site, www.jimpepperlives.wordpress.com, and can be reached at [email protected] His work also appears on www.inmotionmagazine.com, in Planet Jazz, and elsewhere.