BY C. MICHAEL BAILEY
April 19, 2016
Sign in to view read count
We are enjoying a rich period of jazz vocals creation, the story continues... 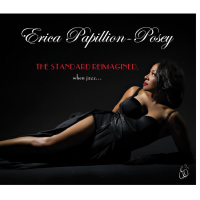 Erica Papillion-Posey
The Standard Reimagined: When Jazz...
Self Produced
2016

Vocalist Erica Papillion-Posey recently published a book entitled Musings From the Mind of a Mezzo, Poetry & Prose of Passion, Pain & Plight (2015), a title revealing a lot about the singer. Posey is classically trained (a mezzo-soprano to be precise) at home in the realms of classical, opera, jazz, and popular music, as well as poetry and prose. Her facility in each area is studied and certain, but not so much that her art has lost its organic nature through study and practice. She is a natural singer who does not have to force her instrument to a given genre, merely, she allows it to adapt and assimilate. These observations are immediately evident on Posey's disc opener, Harry Edison's by way of Jon Hendricks' "Centerpiece" whose violin introduction, obbligato, and soloing by Jarius Daigle add to the fecund-organic sound of Posey's well-grounded vocal approach. Using the piano, violin, and bass as support, Posey is poised to present a dozen standards scrubbed free of romantic varnish. "Night and Day" and "Nature Boy" show Posey to be perhaps the best classically-trained voice to approach jazz. She indulges in none of the technical wizardry necessary in opera, opting to display her keen instrument in its purest, most fundamental form. This is an excellent first outing. 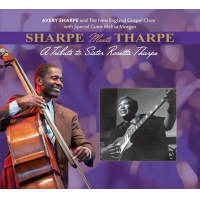 The leader here is bassist Avery Sharp, who is joined by vocalist Meli'sa Morgan, for a collection of songs associated with Cotton Plant, Arkansas-native Sister Rosetta Tharpe. Sharpe's concept is sound and his planning and execution is precise. Using a big band and The New England Gospel Choir behind the ebullient Morgan, Sharpe builds a richly complex cathedral of sound around the spiritual music of Tharpe. Morgan emerges with a muscular, full-throated voice fully capable of embracing the Holy Spirit of this music. She approaches "Above My Head" with the near abandon possessed in a SRT performance. Bassist Sharpe was raised in the expressive Church of God in Christ, who always have taken their music seriously. Sharpe brings this life of experience to this project, this experience evident in his arranging and playing. Sharpe's approach embraces the spirit of Wynton Marsalis' work with Jazz at Lincoln Center with is attention to older jazz forms presented in more modern format. But, it is not all sacred music. Included are the secular "I Want A Tall Skinny Papa" with the Sharpe original compositions in the organ-driven "Miss Nubin" and the bass-dense "Spiritual Dilemma. The disc opens and closes with "This Train" the coda version closing in a a glorious 10 minutes. This is joyful and sensual music. 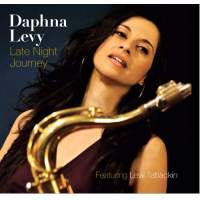 Tel Aviv-born singer Daphna Levy comes from a long line of cantors from the original Tribe of Levi. Those roots run necessarily deep and a shown ecumenical as it was her experience at an early age hearing a Gospel Choir performance that put her on the path of jazz vocalist. Her debut recording, Late Night Journey proves Levy to be a dyed-in-the-wool torch singer with greater-than-a-torch-singer's talent. Levy pens the opening and closing pieces, inserting 10 disparate standards in between. Tenor saxophonist Lew Tabackin appears on the lion's share of selections, lighting up "All of Me" and "In the Evening When the Sun Goes Down." He is true jazz royalty. Speaking of "down," Levy burns down George Gershwin's "I Got Rhythm" with a near all-scat performance buoyed only by bassist Assaf Hakimi for the better length of the song. Levy is a formidable vocalist and composer with the smarts and chops to assemble both a good band and repertoire. I hope to hear much more from her. 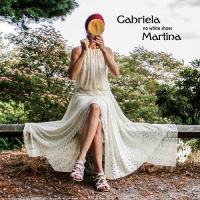 Gabriela Martina. She is not who or what you think she is. Swiss-born, now based in Boston/New York, this young and precocious talent emerges, fully formed, with No White Shoes, a assembly of mostly original compositions informed by a world full of music. Her musical vision is held down by token American, bassist Kyle Miles. Each contributes solid performances that nail down all four corners of Martina's restless sound. Her compositions are smartly arranged and maintain an sharp edge of creativity and newness. But it is on the two "standards" that Martina makes her bones. Wayne Shorter's "Witch Hunt, " from 1965's Speak No Evil (Blue Note) is transformed into a near hallucinogenic plainchant that would have scared the shit out of Hildegard von Bingen. Martina's post-modern deconstruction/reconstruction of perhaps Dizzy Gillespie's greatest composition, "A Night in Tunisia" is beyond being a revelation. Re-workings of the canon like this reveals both the genius of the composer and the interpreter. Let's hope this is just the beginning, with more of this same sophisticated music to come. 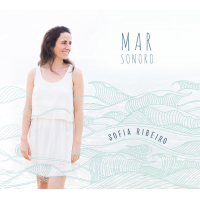 The Portuguese singer/composer Sofia Ribeiro runs a musical thread through all music touched by that thin slice alchemy clinging to the edge of Spain. She does not waste her time musing over Brazilian music of the ilk of Bossa Nova, rather, she reaches deeper for more primal inspiration. Working with a basic and international rhythm section: Colombian pianist/arranger Juan Andrés Ospina, Greek bassist Petros Klampanis and Argentinean percussionist Marcelo Woloski, Ribeiro lays waste to both the idea of genres, as well as, cultural delineations. The title piece, translated "Sound Sea" is based on a poem by Portuguese poet and writer Sophia de Mello Breyner Andresen includes a string section providing Ribeiro the environment from which to singe and indulge some impressive technical fireworks with her voice. Like opera, one need not necessarily understand the lyrics to perfectly understand the music.