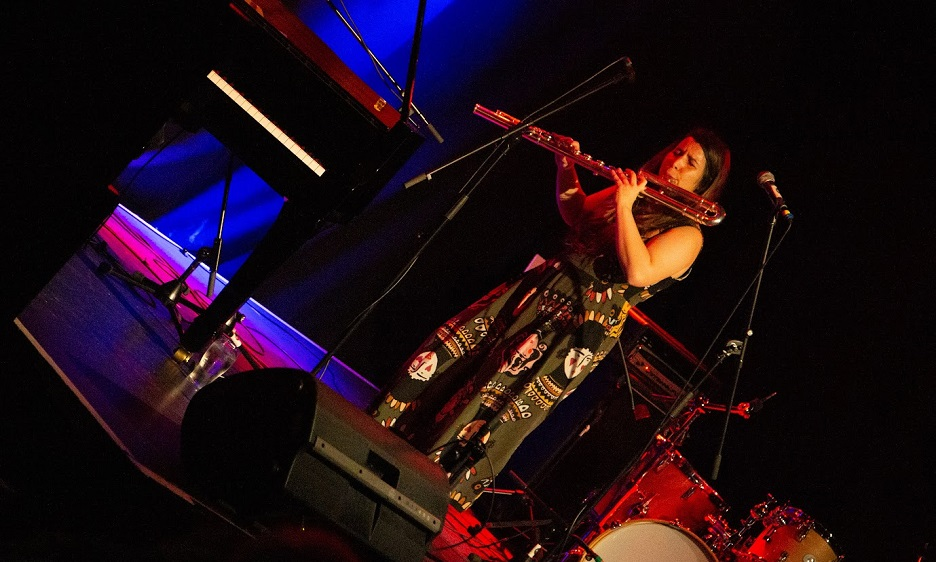 As a UNESCO City of Music and as the host of Jazz Promotion Network's (JPN) annual conference (see separate article), Belfast was expected to deliver on the musical front. And it did so, in tandem with Dublin.

It is not the first time that this small island's two premier jazz promotion organisations, Belfast's Moving On Music (MOM) and Dublin's Improvised Music Company (IMC) have collaborated. Both organisations work extensively with local and international musicians in their respective round-the-year gig programs, talent development schemes and festivals of international calibre, pulling their resources from time to time to bring the best jazz and improvised music to Irish audiences north and south of the invisible border.

The cooperation between these two internationally renowned organisations for JPN's conference was entirely apt given that JPN works to support jazz and improvised music across the UK and Ireland, or the five nations, to use its own terminology. Between them, MOM and IMC have almost sixty years of promoting this music under their belts, through thick and through incredibly thin. It is safe to say that they know a thing or two about promoting good music.

Their four-band showcase program, plus several musical performances that took place during the conference proper, merely skimmed the surface of the jazz/improvising talent on the island of Ireland, but it was certainly reflective of the stylistic diversity and the high level of musicianship that Ireland is rightly famous for.

The first evening of the JPN conference saw delegates decamp to The Black Box, one of Belfast's premier live venues. The Black Box is effectively MOM's home venue and the site of its annual Brilliant Corners festival, a true highlight of the packed Northern Irish musical calendar.

The Scott Flanigan Quartet got the evening off to a flying start with a selection of compositions from its forthcoming album Clouded Lines—music commissioned by the PRS for Music Foundation and Moving On Music. A versatile keyboard player, Flanigan has played with everyone from Van Morrison and the Ulster Orchestra to Larry Coryell. In recent times, Flanigan has also been the driving force behind Scott's Jazz Club, a Friday-night venue that stages the best in Irish jazz.

His current quartet boasts guitarist Ant Law, bassist Dave Redmond and drummer Kevin Brady—outstanding sidemen and notable leaders all in their own right.

Since meeting Law on Serious's Take Five talent-development program in 2017, (an edition that also featured Nubya Garcia and Camilla George), Flanigan has arguably embraced a more modernistic approach to small combo playing. Pianist and guitarist dovetailed closely on the highly melodic, though teasingly short opener, their lead lines overlapping and vying for space. On the rhythmically propulsive second number, driven by Redmond's mantra-like pulse and Brady's busy polyrhythms, pianist and guitarist took turns to develop extended solos full of swagger and invention, with Brady unleashing some fire of his own in a charged finale.

Barely pausing for breath, Flanigan embarked on a classically hued, rhapsodic piano intro of some intensity, the notes gradually bleeding gently into a brushes-steered slower number that featured a fine solo from Redmond. The set concluded with the third part of the Clouded Lines suite, a busy, bop-flavored workout that felt a little out of sync with the music of altogether more personal stamp that had preceded it. Flanigan and Law strutted their stuff impressively before reuniting on the head and taking their bows. With the album due to be launched in 2023 it is to be hoped that the Scott Flanigan's quartet will tour the five nations—and beyond—to promote it.

American saxophonist Meilana Gillard has made Northern Ireland her home for over a decade now, first in Belfast and latterly in Derry, collaborating with the country's best jazz musicians and earning a reputation as a leader in her own right. Her recording career has not been as prolific as perhaps it should be for a musician of her talent, but the good news is that this trio, featuring bassist Dave Redmond and drummer Kevin Brady—no rest for the wicked—has recorded an album that is due for release before the end of 2022.

At the trio's performance at The Black Box back in March during the Brilliant Corners festival, there were thumping covers of Nirvana's "Smells Like Teen Spirit" and Soundgarden's "Black Hole Sun." This evening, originals from the trio's yet-to-be-released album dominated the set, beginning with a slowly grooving number that saw a smoking tenor solo of economy and power from Gillard, followed by an exceptional solo from Redmond. Throughout the set the leader's compositions were marked by the generous space afforded her trio partners, Redmond and Brady, whose keen understanding after twenty-plus years of rhythm-a-ning together shone through.

A tenor player who marries old school, blues-based melodicism with a more modern edge—somewhere between Coleman Hawkins and David Murray—Gillard's sound, especially on "To Remain Nameless," drew from soul and funk as much as straight-ahead jazz. Hers is a big, seductive sound, exciting without ever resorting to theatrics or showboating, lyrical though never maudlin. Rhythmically grooving and tightly tethered one moment, loose and exploratory the next, RBG Trio's aesthetic was both familiar in a rootsy way and thrillingly free-spirited.

Gillard displayed excellent chops on the set's only standard, Bronisław Kaper's "Invitation." After an unaccompanied intro, the tenor player toyed playfully with the melody in a potent extended solo, buoyed by Redmond and Brady's swinging groove. Both bassist and drummer signed off with energized solo statements, the trio reuniting on the head. Firmly in the tradition yet open to more modern pastures, RBG Trio's fire and grace surely merits an audience beyond Ireland's shores.

Japanese-born but resident in Ireland for over two decades, Izumi Kimura pops up frequently in the most demanding musical settings. Whether playing in a duo with Barry Guy or tackling John Cage's "Sonatas and Interludes for Prepared Piano," the pianist is fearless in her music making, walking a tightrope between composed and improvised music that brings her into the orbit of many of Ireland's most progressive musicians, jazz and otherwise.

Australian flautist Lina Andonovska is a kindred spirit, toggling happily between orchestral music and maverick music-makers such as Bang On A Can, Crash Ensemble and, at the Brilliant Corners festival in March, in duo with drummer Matthew Jacobson, who guested on A Way A Lone A Last (Diatribe Records, 2020) Andonovska and Kimura first came together on an Improvised Music Company 'blind date,' an innovative lockdown series which paired two unsuspecting musicians together, divided by a curtain so that neither knew who they were playing with. Such was the chemistry between the two that day that they have carried the adventure forward.

For forty uninterrupted minutes, Kimura and Andonovska engaged in a dialogue of subtly unfolding contours characterized by sotto voce whisperings, dramatic peaks, and sumptuously lyrical middle ground. For improvised music, this was remarkably melodic at its core, pockets of icy impressionism or minimalism aside. From time to time, one or the other would adopt the lead role, but for the most part the dialogue was one of contrapuntal improvisation, two voices interweaving, prodding and cajoling, locking into sync and riding the wave, then surrendering to the bravest of bare-bones exchanges.

At the extremities the music was boldy avant-garde and arrestingly beautiful. The places in between, where the duo pulled this way and that, never settling into patterns for any length of time and always asking questions, was every bit as riveting. Andonovska and Kimura are both masters at drawing myriad textures from their respective instruments— plucked, tapped and plosive sounds, percussive rhythmic pulses that all underpinned the broader narrative. Their alchemy held The Black Box audience gripped in a hushed trance until the applause erupted in a spontaneous and enthusiastic show of appreciation at the end.

The task of ending the Irish showcases with a bang fell to Belfast iconoclasts Robocobra Quartet. The band had played to a near sell-out crowd at the much bigger The Empire a couple of months earlier to launch its album Living Isn't Easy (First Taste Records, 2022), its hard-gigging regime over the past eight or nine years clearly paying dividends as its following continues to grow.

Unfortunately, the very muddy vocal sound made Ryan's lyrics all but incomprehensible. A pity, as his lyrics are pointed, poetic, funny and thought-provoking. How often do you hear a line like, "Oh Daedalus, you cheeky fucker"?

Yet with much of Robocobra Quartet's power residing in the collective sturm and drang of its rock-meets-jazz aesthetic and the infectious grooves of songs like "Labyrinth," the muffled vocals were but a minor hurdle to overcome in surrendering to the band's unique charms. A short but punchy set wound up with "Wellness," a danceable, lyrically whacky satire on social influencers.

Not quite jazz and not quite rock, Robocobra Quartet inhabits a musical no man's land—an island onto itself.

The vast majority of the audience for these showcase bands was a paying public. As emerged from the JPN conference, the trend for the showcasing of bands seems to be moving from an audience of specially invited promoters in specially curated venues to the rough and tumble of the public domain, that's to say, clubs and regular punters. There can be no better litmus test of music for any attendant promoters than to gauge the reaction of a crowd to music, so it was surely gratifying for the musicians, as well as for the Irish hosts, to see all four bands received enthusiastically.

Jazz and improvised music is evidently in good shape right across Ireland, thanks in no small measure to the unstinting support over many years of Moving on Music and Improvised Music Company.