By John Dworkin
November 2, 2008
Sign in to view read count 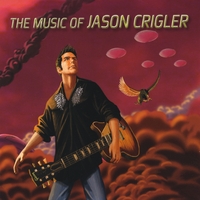 The Music of Jason Crigler

Guitarist/singer/songwriter Jason Crigler's The Music Of Jason Crigler, nearly a decade in the making, opens with the words: "I think at first she might be dead." The irony is that four years earlier, after Crigler suffered a massive brain hemorrhage, doctors said he may not make it through the night and that if he did there wouldn't be much left of him. Crigler made it through the night and has plenty left for his first release since the injury. The other irony is that someone having gone through such an arduous and dark experience could produce a CD full of such optimism, humor, and light.

Crigler's songwriting is a combination of light and dark (musically and lyrically), layered guitars, thoughtful pop orchestrations, and detailed arranging instincts. His writing is the focus of the project, but the CD has an ensemble cast feeling more than that of a single star. This is by design. Every song (save one) features a different vocalist, and there are very limited jam sections. This makes for a pleasingly terse, yet varied, recording.

In a CD with many highlights, "The Bush And the Tree Song, Pt. 1" stands out. With the CD's deepest groove, it's an Americana/soul/roots song clearly paying homage to the sound of The Band. Featuring phrases so relaxed, seemingly simple and direct you may find yourself thinking, "I could've written that." But, of course, you didn't. Crigler makes it sound easy and gives the listener the impression that the choices made (adding mandolin, arranging ideas, etc...) were simply inevitable.

The most important choice Crigler made for "The Bush" was casting Amy Correia to sing it. She puts the tune over the top. In this song of archetypes—where someone is running away, hiding, using nature, finding little towns—Correia doesn't just sing the tune. She takes on the character and lives it. Her soulful feel on this track is deeply relaxed. There's a laidback softness in her voice but no lack of strength. Her voice has an edge too but it's tempered; like the acidity of balsamic vinegar cut with the sweetness of maple syrup. Coming through as well is her power to testify in a gospel-like way. If Correia puts out an entire record of material this strong she'd be a cinch to predict for a good sized breakout. Excellent performance.

The CD's opening track, "See The Sun," is much more pop in tone and a bit more sophisticated harmonically. The lyrics are more specific than "The Bush" and paint more detailed images in the listener's mind. They tell the story of someone dealing with a friend who is so down they can't get out of bed:

Morgan Taylor and Rachel Loshak sing this one bringing angelic, breathy harmonies into the chorus representing the sun to draw the friend out of bed and into the world. Listening to their singing in this chorus recalls the great Lester Bangs quote, "vast, scenic bridges and angelic choirs in your brain."

Lyrically, Crigler can hit from many angles. He's got the ability to touch on universal truths through the relating of specific personal experiences ("See The Sun"). But he can also do the opposite: write generally about more abstract ideas ("The Bush") which allow the listener to create their own personalized relationship to the music.

In the song "Different Clothes" featuring Marshall Crenshaw, and described by Crigler as "some crazy African-sounding rockabilly thing," his lyrics are just plain fun yet remain insightful:

Buckles, belts, shirts and shoes / Are all the same for me and you / Why don't we all start sewing clothes / A needle and thread and off we go... / Just like we all have different names / Like pictures held in different frames

Or the closing track "My Alien Friend" where Cynthia Hopkins yearns for the return of her alien abductors because, "This planet's too small/I'm outgrowing these walls."

In a different light, "Mr. Important Person" featuring Kenny White, and "Commonwealth Row" featuring Noe Venable, are two songs which form a cryptically dark pair of bookends. They live in a type of dream state, both cast in ringing acoustic guitars and reverb soaked electrics, and sing about characters haunted by relatively unexplained past events and loneliness. White sings about unattended parades and soldiers in hiding. His intensely emotional, frail, and unguarded reading of this song echoes Neil Young or Rick Danko in classic tunes like "Harvest Moon" or "It Makes No Difference." Venable sings with a similar level of vulnerability about a mysterious, half-explained tragedy which has disconnected a woman from the outside world. Like a confident film director who trusts his audience enough to omit certain details, Crigler leaves holes for his listeners to fill in on their own. In this sense, the act of omission opens a door making the songs bigger, not smaller, and allows the active listener a sense of part ownership in the song. It's a gift.

In addition to this CD, there is now a much acclaimed, award-winning documentary film chronicling Crigler's recovery titled Life.Support.Music. by Eric Daniel Metzgar available on DVD. Yet another way to celebrate the music of Jason Crigler.


Tracks: See The Sun; When The Morning Comes; The Bush And The Tree Song, Pt. 1; Through Tomorrow; The Game; The Books On The Shelf; See You; Mr. Important Person; Different Clothes; Commonwealth Row; Dixie; We Fell Down; My Alien Friend.