By PHIL DIPIETRO
February 4, 2005
Sign in to view read count 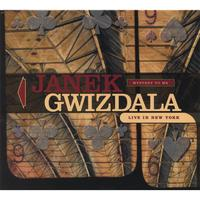 Janek Gwizdala roars out of 2005's gate with a debut CD that not only handily establishes him, at 26, as 2005's best new talent on electric bass but more importantly, should garner him serious consideration for the debut jazz recording of the year. Self-released, self-financed, self-produced and self-penned, there's not an element of this project that's not utterly professional from the playing to the packaging.

While Gwizdala is just getting some notoriety as an electric bassist who can play any style in the league of the world's elite, including soloing sax-like over serious bop changes, it's the writing here that should get him noticed beyond the relatively smaller world of low-end enthusiasts. This is adventurous small group modern jazz at its best, but with an exciting twist-it's performed by an electric band. It's a timely idea that's already come and gone, but is somehow recycled here anew. No fusion or smooth jazz here folks-this is the kind of thoughtfully composed, tightly arranged modern jazz that might be found on the Fresh Sound New Talent label excepting an electric bass pulse, fluid electric guitar, tasteful synth colors and cutting edge modern beats coming from a live trapkit.

While the band is most electrified by Gwizdala, electric-legatoist Tim Miller on guitar, electric keyboardist Elliot Mason and ultrahip drum-stylist Jojo Mayer, it's the front line horns that literally keep the breath in the sound spectrum. That group includes established tenorist and surprise cast member Mark Turner teaming with three of the most promising new talents on winds today, John Ellis on soprano and bass clarinet, Gregoire Maret, late of Pat Metheny's band, on harmonica and the very same synth-wiz Elliot Mason tripling and tripping on trombone and bass trumpet.

For an immediate and effortless example of this intersection of styles, cue up "Time Stands Still" as the horns and harmonica set up a swaying riff over Mayer's hip snare and ride shuffle, Miller weaving in and out of the horns and through the barlines. Turner then proceeds to devour an electric vamp before returning to a unison line with Gwizdala. While we expect ultra-modern, athletic playing from Turner at this point in the game, it surprises in this context, especially as Miller follows with more of the same.

In fact, Miller's work throughout should garner him well-deserved notoriety. His lines are executed with a legato virtuosity, springing off the fingerboard as if they are tapped out by mallets, not fingertips. More importantly, they are extremely non-guitarcentric and have a rhythmic sensibility and motion found at the highest echelons of the music. In other words, you simply won't hear Miller run a scale throughout, and when he plays you get a sense of movement akin to a kick-returner weaving through an entire defense on a 110 yard runback. The phrasing and melodic contour on "Time" in particular are exemplary-not many guitarists can blow in inside territory with as many novel ideas as Miller who, at 31, provides a fresh, promising new voice in jazz guitar.

The title track is gorgeously voiced between Turner's tenor and Ellis' soprano with support form Mason's bass trumpet. This sets up an absolutely killer five-note hook by Miller over a wood-toned descending root, 5th, minor third bass line that's as catchy as anything you'll ever hear in the jazz realm. Any other composer would milk this for an entire tune but Gwizdala manages to glom on a super-busy horn section that Tower of Power would probably find inspiring, while somehow not interrupting the continuity of the tune or form, only to then throttle it back seamlessly to the original lush voicings over that same hooky bass line. This transitions into a superb angular soprano solo by Ellis over Mayer's stunningly organic, jungle break. The horny horns return, Miller soloing over the top, at first more slowly than the breakneck section only to then roll over them unsuspectingly as they drop out, vortexing with Mayer's drums into an exhilarating swirl that peters humorously into Gwizdala's chuckle.

This unedited moment is a good place to note that this debut was recorded in front of a live audience, with every tune recorded in one pass. It's was also ready for consumption relatively immediately -recorded the 4th, mixed the 5th and mastered the 7th November 2004.

"Why" shows why Maret is such an in-demand player. On this heart-rending folk-jazz ballad it sounds as if his harmonica cries reluctant, melancholy tears out of the fluttering, nervous eyelids of Mayer's brush-ridden snare. Then Miller's cries ring out over Mason's lush chordal underpinning. With every note choice Miller defies the fretboard's layout while Mason's patches here and throughout are sonically right on—no cheese, no retro, no overkill—all just right.

"Joshua"'s pristine horn chart is a thing of beauty, especially as it crosses Miller's supportive clusters. Gwizdala's tone here is full of air and wood and perfect for the environs, surprising since he's an advocate of not changing his amp or effects settings from tune to tune , preferring to get tone from the fingers, not the gear. Turner's solo explores the full range of horn from measure to measure, so forcefully exploring the upper range at one point, you'd think Ellis had entered on soprano. Mason then solos on synth, conjuring each phrase into the next for a potent brew. To listen to Mayer's work under this solo and then take pause to contextualize it over the course of the record, such as the swinging jazz burn of "Circles," is to conclude he remains one of the music's most elite and most underrecorded drumming masters, and that his discography should see a corresponding increase in size.

Notice that we finally get a solo spot from the leader of the date six tracks deep into the record on "PK." It's an eerie Brazilian melody brimming with ear-bending intervals, beginning with Gwizdala's emotive duet with the freshly minted Monk competition winner for voice, Gretchen Parlato. His solo is all effortless linearity and lyricism, showing on one level, that he's in an elite class of players and on another, that his playing is capable of bursting with emotional content on the level of, say, a Gregoire Maret, who seamlessly succeeds him with a bejeweled dart to the heart. Throughout all of this, we get a marvelous chorus of voices containing sixteen pre- produced tracks of Ms. Parlato in various registers, all of them beauteous, that was triggered live during the session!

"And Another Thing" ends the date perfectly, a deceptively simple horn section of Ellis' bass clarinet and Turner's tenor bending our ear towards Mason's synth lines over the top. This yields to an expertly executed drum'n'bass jazz vamp between Mayer and Gwizdala that Mason springs off of into the chops-laden, absolutely liquid stratosphere-on trombone! Less than a handful of trombonists in the world can execute on this level and absolutely none of them look more like Vin Diesel ! Mayer continues with his absolutely sick stickwork as Gwizdala puts an exclamation point on his solo debut with a superb solo, supported by Mason's thick synth-bass.

Gwizdala deserves kudos for merely pulling off a date like this and for pulling together an independent release of such high production quality after a live studio session. But he deserves even more for taking the higher road conceptually, for jettisoning his considerable chops and flash for the sake of the conceptual thrust here. Throughout, he and his talented cast do nothing less than drive home a point that should be driven home to jazz' critical establishment -electric and acoustic instrumentation can indeed coexist to combine seamlessly to create modern jazz of the highest caliber and aesthetic, at times eruditely pristine and at others, wonderfully reckless.