Jaco: The Extraordinary and Tragic Life of Jaco Pastorius 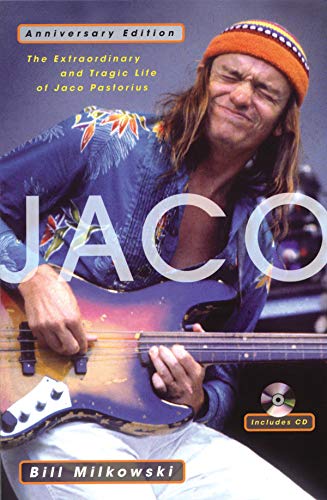 Very rarely an exceptional artist emerges, dramatically altering the possibilitites in music. Jaco Pastorius was one of these, as Bill Milkowski's book (updated from the 1995 first edition) on the electric bass phenomenon reveals. Milkowski carefully stiches together documentary fact and oral history (Jaco's twangy voice, plus lots more, can be heard on the companion CD), telling a story of accomplishment and loss.

The picture that emerges is baffling, as Milkowski acknowledges, disclaiming any attempt to "explain Pastorius. Jaco's seemingly effortless playing; his dizzyingly quick ascent to superstardom; the explosive impact he had on the music scene; and finally, the spectacular flame-out: it's all here, but the reader is left to make sense of it.

Although hyperbole associated with the subject's gift is generally given free reign here, the fact of Jaco's contribution can't be refuted. We learn that Pastorius started as a drummer (thus the striking rhythmic solidity of his work), played piano and guitar and was a devoted student of harmony. Jaco also reveals the less commonly understood impact Pastorius had on both the feeling and propulsion of the music as a potent new catalyst for Weather Report or as Joni Mitchell's ideal bassist.

The last chapters detail the bizarre events of Pastorius' sad, awful unravelling. Milkowski's assertion that Pastorius was mentally ill clashes with his own portrait of a clean-living, dedicated young artist who only later succumbs to the temptations and pressures inherent in sudden, intense notoriety. It seems plausible that, as Joe Zawinul suggests, years of staggering substance abuse activated existing mental imbalances, leading him down the sad, squalid path toward homelessness and early death. Jaco Pastorius would be only 53 today. The music testifies best: this was a great loss.