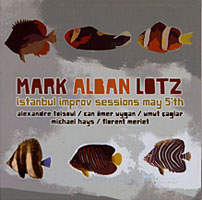 German-born flautist Mark Alban Lotz grew up in Thailand and Uganda, and has had an interesting career path. He began playing the flute when he was 17, and went on to study jazz and classical music as well as contemporary musical idioms. His music is nourished by all three forms, but he also has a healthy approach to open improvisation and various strands of world music.

Lotz has been shaping his professional career from the time he formed his first band, Albanism Quartet, in 1988. He has constantly searched for something new and different; even as he blended his various influences, he was seeking new pastures. This led him into several world music concepts, from playing with the Global Village Orchestra to collaborating with Indian classical musician Raj Mohan. To make it all the more germane, he played with some of the finest improvisers around including trombonist Johannes Bauer, drummer Han Bennink and bassist Vitold Rek. Here, he teams up with an eclectic band of improvisers in Istanbul to forge interactions that are both articulate and intriguing.

The musicians are of a mindset: inquisitive, and ready to grab on to an idea and extrapolate. It is the perfect setting for duo, trio, quartet improvisations and collective engagement. "North Star" navigates an introspective line to resolution. Lotz— the minstrel, beckoning the others through the changing consonance of his flute—initiates the dialogue with trumpeter Can Ömer Uygan, and electric guitarist Umut Çaglar. The ambit is expanded in Uygan's forlorn trumpet and the effects injected by Çaglar into his electric guitar. The atmosphere turns electric as the pulse continues to change intensity and trajectory. Sound is captured and manifested into startling shapes and becomes not only a harbinger of the essence of this record but also the messenger of the power of invention.

The collective improvisations "Friction" and "Sintactics" move in two distinct directions. The first is propulsive building lines of searing intensity that cross paths, intertwine and explode. It's all heady and exciting, but the slivers of calm that float in and out add not only to the body but to the impact. The modulated discourse of the latter leads to a more open structure. Each player adds to the tableau, shifting, turning and sparking an ensemble of motifs that celebrate cohesive logic.

Lotz fills the context of "Dr. No" with a powerful harmonic incursion. His approach is dynamic on this duet with drummer Florent Merlet, who adds the right accents and shades to build a glow below Lotz's vivid impulses.

Lotz and his team mates transcend the ordinary in creating a host of flexible dynamics and harmonic inventions to make for an affecting experience.