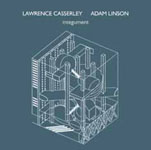 Lawrence Casserley and Adam Linson have well-established links with Evan Parker and with each other. Both have previous releases on Psi and since 2004 both have been members of Parker's Electro-Acoustic Ensemble. That is highly relevant to the music on Integument as that ensemble features real-time processing of sound, as does this album.

On his solo bass album, Cut and Continuum (Psi, 2006), Linson deployed sampling and processing of his bass, building up layers that created a rich varied soundscape unlike many solo bass recordings. Casserley is a pioneer of real-time sound processing. His work in ColourDome and with Parker and Paul Rutherford is particularly noteworthy. This is the pair's first joint release.

In different forms, it is the sound of Linson's bass that dominates this album. On five of the seven tracks here, Linson plays bass and Casserley processes it. On two other tracks Casserley's voice and Linson's own processing are added.

Repeatedly, the music here calls to mind the title of an old Parker album, one of the first to feature sound processing—Hall of Mirrors—a precursor of the Electro-Acoustic Ensemble. In a real hall of mirrors uncertainty arises about the reality of the images: is that real or a distorted reflection or the reflection of a refection—and so on?

Casserley and Linson themselves seem aware of such conundrums. As well as the music, the album includes a fascinating booklet containing a rambling email conversation between Casserley and Linson from March to November 2008. This illuminates the collaborative creative process and their feelings about it. Their conversation also explores comparisons between their methodology and such literary methods as the Surrealists' use of automatic writing and William Burroughs's cut-up technique.

Linson describes the album: "As the process of mutual interaction unfolds we both reveal something of each other; I find we have opened up a space or a world where we co-exist, which can emerge to other listeners, who can also co-exist there." It is hard to disagree with that.

Incidentally, the album is named after the integument which is the outer layer of a plant seed; the integument is a complex structure, and the track titles all refer to parts of it. An intriguing choice that leads to speculation about the reasons why.