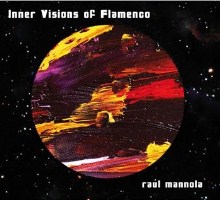 Born in Brazil, raised in Finland and residing in Madrid, guitarist Raul Mannola has immersed himself in the art of flamenco for the past 25 years. In this time he has won over flamenco musicians, critics and jurists alike, impressed by his notable technique, and more importantly, his evident feel for the music; both attributes abound in this recording. Mannola is, however, an innovator, and he makes elbow room here for non-traditional instrumentation which brings fresh colors and timbres to the idiom. In this way, Mannola aligns himself with the vision of musicians such as guitarist Paco De Lucia and singers Camarón de la Isla, Enrique Morente, Fernando Terremoto and, more recently, Diego el Cigala, all of whom have dared to shake up the notoriously conservative flamenco domain.

Mannola alternates between flamenco guitar and the uncommon—at least in flamenco—12-string guitar on "Grande y Eterna" and "Ese Gitano Bueno," but it is Raoul Bjorkenheim's electric guitar which draws attention. The timbre may be atypical to flamenco, but as Björkenheim dovetails with singer Fariña on the the lament, "Grande y Eterna" and lends urgency to "Ese Gitano Bueno"—charged by the percussive rhythms of dancer Aylin Bayaz and Pablo Martin Jones's cajon—it's clear that the idiom is the same.

ADVERTISEMENT
The flautist's contribution to this recording is significant, lighting up "Tetracordos" in the arresting unaccompanied introduction reminiscent of reeds player Rahsaan Roland Kirk with his guttural exclamations and darting, bluesy runs. Fine 12-string playing from the leader, who joins Aracil in flying unison lines, flamenco guitar from Bianchi and strong vocals from Fariña provide highlights in this episodic buleria of some ambition.

Mannola impresses throughout as a wonderfully rhythmic accompanist, a subtle colorist and a fine soloist, but he is perhaps a flamenco composer first and foremost. These seven originals cover a wide range of styles from granainas, milongas, seguiryas, abandolaos to dashing bulerais. Each composition is marked by memorable melodies, none more so than the exquisite "Graciela" which pairs Mannola with Aracil to delightful effect. The prevalence of tabla, the degree of improvisation and Mannola's eastern-sounding bending notes also suggest guitarist John McLaughlin's Shakti as an influence.

The striking cover art by blind artist Rafael Arias underlines the notion—felt throughout Mannola's potent music—that an inner vision, if strong enough, can overcome handicaps both real and perceived.