By JEROME WILSON
February 11, 2020
Sign in to view read count 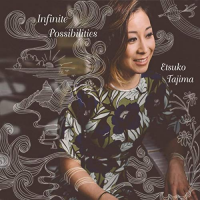 Etsuko Tajima is a Japanese pianist now living in New York who shows her talent as both a player and singer on this, her first CD, recorded back in 2016.

Her piano style is an attractive mix of jazz and classical elements often marked with an easygoing sense of swing. It blends well with the different styles and flourishes the rhythm section, bassist Nori Naraoka and two different drummers bring to each track. Mark Whitfield Jr. keeps the rolling surface of "Giraffe In The Snow" interesting with complex, stuttering hip-hop beats while Darrian Douglas powers "Nearness Of You" with a slick reggae rhythm. The romantic classicism in Tajima's piano style comes to the fore both in her stately solo piece, "Furusato" and a poignant duet with trumpeter Takuya Kuroda on "Be My Love." The title track features Whitfield's break-beat laced drumming again, but this time it underlines Tajima's most ambitious playing of the set as she goes through cyclical surges on the theme leading into a structured but exhilarating solo with a bit of Brad Mehldau's formal grandeur about it.

The lighter side of Tajima's playing shows best on two tracks. First there is her debonair strutting over Douglas' and Naraoka's second line groove on "Sunny Side Of The Street." Then on "Be My...," a fusion variation on "Be My Love," she charges hard on Fender Rhodes as Kuroda flies around on trumpet, while piano, bass and drums chase furiously behind him. Tajima also gets to show her vocal ability three times. She sings in a gentle Japanese over quietly vibrant electric piano on "If That's Meant To Be" and in endearing, cooing English on "The Nearness Of You" and "Burning Love."

Etsuko Tajima is both a talented and adventurous pianist making hauntingly pretty sounds. This first album gives a good account of what she can do. Hopefully she will give us a recorded update soon.

Giraffe in the Snow; If That's Meant To Be; Be My....; The Nearness of You; Be my Love; On the Sunny Side of the Street; Burning Love; Infinite Possibilities; Furusato.