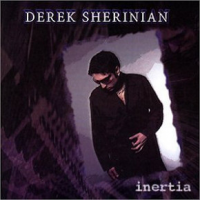 Keyboard whiz Derek Sherinian has made a living as a first call session ace, performing and recording with such disparate talent as Alice Cooper and “Kiss” along with his involvement with prog-metal bands, “Dream Theater”, “Platypus” and the high octane “Planet X”. However, Inertia might represent Sherinian’s finest recorded hour to date!

Co-produced by the incomparable drummer Simon Phillips, who also lends his wares to every track, Sherinian also garners Herculean support from venerable guitarists Steve Lukather and Zakk Wylde, who appear in either in duo settings or respectively man the helm on individual tracks. Bassists Jimmy Johnson, Tony Franklin, Tom Kennedy, and electric violinist Jerry Goodman provide potent support on various works throughout this shrewdly envisioned production. Ultimately, Sherinian shines forth as an ardent composer, thrilling soloist, prominent leader and clever manipulator of digital samples, patches and MIDI technology. All told, the keyboardist demonstrates strong rhythmic sensibilities along with a flair for developing unusual or unorthodox sound textures from his equipment and studio EFX.

Sherinian and Wylde got toe to toe on Edgar Winter’s hard rock classic, “Frankenstein” as the band dutifully conveys an ominous tone, bespeaking the horrific (albeit tongue-in-cheek) implications of the song’s title. With this piece, Phillips and bassist Tony Franklin add the required zest and punch! Otherwise, the various ensembles provide the obligatory ingredients to get your blood simmering, whereas part of the overall beauty lies within Sherinian’s multilayered treatments, bone crushing licks and noticeably melodic gifts.

Steve Lukather injects an East Indian vibe with his electric sitar on “Mata Hari”, while the men cross genres with a jazzy yet hard driving rendition of Charles Mingus’ classic, “Goodbye Porkpie Hat”. Overall, there’s quite a bit to digest here, as Inertia looms as a must-have for the ardent progressive-rock lover. Basically, Derek Sherinian’s star has risen! Highly recommended.