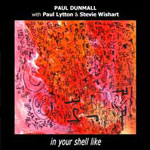 Neo-cons and other tin-eared types who harp on free music's so-called break with tradition should listen carefully to the first track on this CD. You want tradition? Here are the sounds of two British musicians creating top-rank improvisations using instruments that cast the saxophone and drum sets favored by the neo-boppers into the realm of recent novelties. London-based Paul Dunmall confines his playing to the border bagpipes, while Brussels-based Stevie Wishart extracts unique timbres from the hurdy-gurdy. If racket and clamor are avant-garde, then musicians playing the Scottish and Irish pipes and the portable mechanical viol have been bizarre ultramodernists for at least two centuries.

Dunmall, who usually—and elsewhere on the CD—plays soprano and tenor saxophones in bands led by the likes of pianist Keith Tippett, and Wishart, who is also a violinist with pianist Chris Burns' Ensemble, aren't predictable players on their traditional axes. As a matter of fact, there are points on "Shells and Other Things" where the wavering pitch vibrations could easily be linked to synthesized tones. Throughout, the reedist's steady spew of air, often circularly breathed, is decorated with oscillating arpeggios from Wishart's rosined bow.

If Dunmall's style on the chanter appears to have the same velocity and elasticity as his saxophone work, then Wishart's stopped strings produce the sort of sul ponticello notes that resonate as if they were looped through a sequencer. Not only that, but she can produce tones as wide as you find from any accordion, and his flutter-toned interface can also be as stretched or as compact as if it came from a saxophone reed.

In Your Shell Like isn't some trendy example of medieval jazz fusion, either. Once they're joined by percussionist and long-time Evan Parker associate Paul Lytton, the three merely output sounds they feel to the best of their talents, on whatever instruments. Some of the best improv you'll ever hear on 20th, 19th, or 16th century instruments is right here.

Track Listing: Shells and other things; Nothing to do with shells; It

Title: In Your Shell Like | Year Released: 2005 | Record Label: Emanem