By ELLIOTT SIMON
August 4, 2008
Sign in to view read count 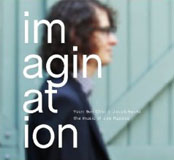 There is a certain paradoxical synergy that exists between the tunes on Imagination and the avant-cum-free interpretations given them by vocalist Yoon Sun Choi and pianist Jacob Sacks. Choi and Sacks work so well together in their own charming, but somewhat weird, way that they turn this tribute to composer Joe Raposo into much more than a celebration of his music. Raposo composed primarily for television shows such as The Muppets and Sesame Street and these songs, many of which suckled the children of the '70s, are explored in ways previously unimagined.

Choi has magnificent vocal command of a variety of styles and within this intimate context she scats, sings the blues and postures as a faux Broadway diva. She jousts with and complements Sacks as he serves as both accompanist and timekeeper, changing tempo midstream and improvising off Choi's intriguing phrasing. Sacks can remind one of pianist Vince Guaraldi of Peanuts fame as well as Laura Nyro in an off-center way and there is more than a hint of an Ella Fitzgerald gone avant-garde in Choi's pure bell-like tone and vocal calisthenics.

The innocent and joyful manner of the originals is not lost. Choi and Sacks clearly have fun mutating rhythms and playing with the phrasing but the songs' serious sides are also expanded upon and revealed. Such is the case on their extended version of the Kermit the Frog signature piece "Bein' Green," a wonderful exploration of the positive aspects of being different in convincing fashion. A slow bluesy version of The Carpenters' hit "Sing" highlights the song's sagacious life-long advice while the psychological escapism of the title piece is elegantly portrayed. Choi and Sacks have dressed these children's classics in adult clothes and the fit is near perfect.