By ROKAS KUCINSKAS
February 28, 2018
Sign in to view read count 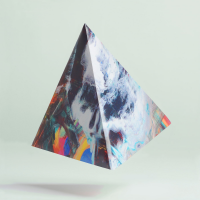 Something that started as a solo project by Tom Henry in his bedroom studio transformed into something much more mature: first his ideas were executed in an instrumental trio setting that eventually evolved into the vocal electronic-soul quartet—Noya Rao. What kind of music does the quartet play? The kind that Gilles Peterson is famous for." With Noya Rao's debut album, Icaros, one can hear everything from LA beatmakers (e.g. Flying Lotus, Tokimonsta, Teebs, etc.) to acts such as Little Dragon, James Blake (especially his keys' sections), or Yussef Kamaal.

The music played by the quartet is very melodic: songs such as "Moments" or "This Time" have very catchy melodies that can be easily remembered after listening to them once. Most importantly, however, none of it sounds cliche, too simple, or "cheesy." They all maintain a distinct alternative outfit articulated by the opening track "Azimuth" and carried throughout the album by the rest of the tracks.

The lo-fi sound of drums brings warmth and adds an overall subtlety to the quartet's debut release. In term of sonic characteristics, the low fidelity also interplays well with the keyboards' sounds creating an "underwater" atmosphere: dreamy, floating, and spacious. Keyboard parts, on the other hand, are very rich, glueing the rest of the instruments together. Yet, because of particular selections made when choosing their sounds, the richness does not overwhelm, allowing vocals to breathe and shine (something of an extreme importance, since the vocalist's voice isn't extremely strong and her timbre can be easily overshadowed). Instead of making everything too polluted, it produces quite the opposite effect bringing lightness and elegance to the whole album. It is also surprising how rich both keyboard and vocal parts are and how well they interplay with each other. Perhaps it results from the softness of the vocalist's timbre in relation to the sonic characteristics of keyboards' sounds, or maybe the rich arrangements in vocal parts mirror the keys' sections? Maybe it's the contemporary pop music's touch in vocals' arrangements that further extends where the keyboards leave? In any case, both make a combination Icaros is built upon.

The only downside of the entire album is the lack of a few instrumental tracks on it, which Noya Rao has in its repertoire! Even if incorporated as a few interlude numbers, they would have brought more colours to Icaros, which for the rest is simply brilliant.