Jeff Hackworth: How Little We Know 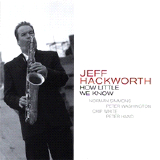 Saxophonist Jeff Hackworth's third album is a shift in style. His first Just For You had a contemporary jazz setting. His second What A Wonderful World (Da Capo Records) was a sax, organ and drums trio. He now leads a quartet with Norman Simmons (piano), Peter Washington (bass) and Chip White (drums). Peter Hand (guitar) joins them on four tracks on an entertaining mainstream journey.

Houston Person was strongly involved in this record. He put together the band and collaborated with Hackworth on the material. Person then went on to produce.

Hackworth makes a potent presence. He gets into the melody and directs with a sure technique and a pleasing creativity. The material lends itself to his playing as he gets into blues, swing and a ballad with felicity.

Much of the music comes from that Great American Songbook. "I'm Just A Lucky So And So has Hackworth investing a deep timbre in the melody. He sustains this with a deliberate pace, upping the trajectory with a little bit of swagger as he goes out to seek new territory. There's fine support from Simmons, whose blues motifs are tasteful as is the drumming of White. Hand's guitar is full and rounded, comfortable in the groove of the melody. He extends the harmony a tad, his approach sitting in well with the whole.

"Tenderly shows Hackworth's ease in turning a ballad into an expressive statement as he goes deep into the strain to filter a coaxing warmth. Why Do I Love You is loose, limber and swinging. It's a delight made all the more so by the pliant run of Washington and the uppity Simmons, who spins some sparkling ideas. The interaction between the players goes a long way in adding to the accomplishment.

Sunset Eyes; How Little We Know; They All Say I