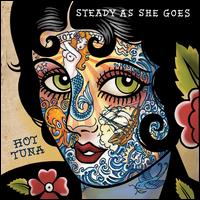 Steady As She Goes

Singer and guitarist Jorma Kaukonen's last solo album, River Of Time (Red House, 2009), sounded more than a little like a vintage Hot Tuna album, so it's little surprise the group's first studio album in 20 years has come along in such short order. Like its predecessor, it was recorded at Levon Helm's Barn in Woodstock New York, and also produced by Larry Campbell, the ex-Band drummer's aide-de-camp for a number of years. Steady As She Goes captures the well-honed musical partnership of Kaukonen and bassist Jack Casady in the company of their most recent compatriots, mandolinist Barry Mitterhoff and drummer Skoota Warner—even without an instrumental comparable to " Water Song" off Burgers (Grunt, 1972).

Begun as an offshoot of Jefferson Airplane at the time Casady and Kaukonen were its instrumental lynchpins, Hot Tuna has always been defined by its inclination to jam, an approach which it doesn't exactly forsake on this studio work, but accommodates neatly on tracks such as the concise opener "Angel Of Darkness." In fact, the sequence of the dozen varied tracks evinces thought given to pacing and mood, the clarity redolent in that respect as in the high audio quality of the mixing and mastering.

Kaukonen's solo doesn't go on very long here—or anywhere on the disc— but exhibits logic in its structure and execution. "Children Of Zion," the slowly percolating track that follows, is, as so many Tuna selections have been over the years, a tune from Kaukonen's avatar Rev Gary Davis; it sounds wholly different in its acoustic textures, not to mention Teresa Williams' gospel-rooted background vocals. Like the best Tuna of yore, it radiates a sense of music arising out of the song, rather than the other way around.

The atmosphere of the recording location no doubt has much to do with the informal spontaneous air that permeates Steady As She Goes, but the truth is, that's a natural complement to the relationship between the musicians. Mitterhoff didn't take long to find a place for himself in the Tuna dynamic once he began to play with the group, shortly after accompanying Kaukonen on the latter's solo album Blue Country Heart (Columbia, 2002), but he nevertheless remains a constant source of surprise in the way he contours his picking to the material, the proximity of Casady's stealth bass lines and, of course, Kaukonen's own fluent fingerwork. Campbell also insinuates himself seamlessly into the well- defined sound of Tuna on the jaunty "Mama Let Me Lay It On You," as well as during the more somber reflections of "Smokerise Journey"

It's indicative of the long-term commitment between Casady and Kaukonen that this project sounds like a natural extension of the resumption of their relationship in the late 1990s, and, in fact, dates back to the initial run that included The Phosphorescent Rat (Grunt, 1973). The two-man touring they enacted shortly thereafter was as redolent of the warmth of friendship between them as the solidity of their musical bond, both of which virtues appear in quantity here during "Goodbye To The Blues."

The slightly loopy attitude rooted in this band's very name flows as an undercurrent on that track, and even more so on "Mourning Interrupted, " thereby counteracting the somewhat pedantic "Second Chances." Like many of Kaukonen's recent originals and choice of covers, it's symptomatic of an unfortunate tendency to philosophize: perhaps he forgets—though multi-instrumentalist Campbell must have reminded him—that his most eloquent statements are those contained in the likes of the guitar work which punctuates "A Little Faster." And hearing Casady issue a statement so articulate and pithy, reflects the firm but flexible foundation at the heart of this band and this recording.

Tracks: Angel of Darkness; Children of Zion; Second Chances; Goodbye to the Blues; A Little Faster; Mourning Interupted; Easy Now Revisited; Smokerise Journey; Things That Might Have Been; Mama Let Me Lay It On You; If This is Love; Vicksburg Stomp.