By GERMEIN LINARES
July 2, 2005
Sign in to view read count 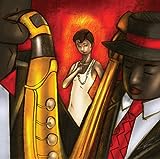 The Hot Club de France was more of an appreciation society than an actual club or establishment in France. The group issued newsletters, sponsored radio broadcasts and film appearances, and produced records. A small phenomenon at home, this underground jazz movement soon swelled to worldwide tours and festivals by the late '40s. Milan Records has gone through some of the club's recordings to produce this collection of tunes featuring such popular figures as Louis Armstrong, Sister Rosetta Tharpe, Willie Smith, and Bill Coleman and the New Orleans Dippers.

The album, also called Hot Club de France, kicks off with Jean Peron Garvanoff and Francois Melchioro performing the aptly titled "Scottish Boogie." Their style, well-rooted in American ragtime, is playful and melodic. The widely underrated guitarist Sister Rosetta Tharpe sings two songs here, the spiritual "Nobody Knows The Troubles I've Seen" and "Go Ahead." Though Louis Armstrong is mentioned three times on the track listing, he is hardly heard on Jewell Brown's version of "Georgia on My Mind" or "Saint Louis Blues."

On "Blueberry Hill," though, we get a better glimpse of the iconic musician. The two songs by the New Orleans Dippers, "Please Don't Talk About Me When I'm Gone" and "Sweet Lorraine," are very much rooted in the N'awlins tradition, with punchy brass notes highlighting the gentler sail of the reeds. Other highlights include Memphis Slim doing "All On One Boogie" and Willie Smith's take on "Tea For Two."

An album best appreciated by fans of pre-bop jazz, Hot Club de France is also a valuable album for anyone new to jazz in general.