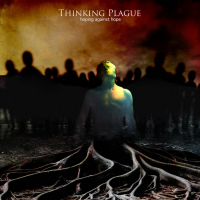 Thinking Plague has been an enigmatic genre defying progressive rock ensemble for 35-years. They span the gamut of a simmering stew, consisting of art-rock, anti-pop, progressive rock, free jazz and segments when acting like doomsday soothsayers led by vocalist Elaine di Falco's whispery but at times, imposing musical presence. Mike Johnson is the primary composer, lyricist and longtime group leader, as the ensemble's Rock in Opposition persona is intact, tinted by its anarchistic viewpoints and methodologies.

There are numerous odd-metered cadences and lots of timber amid powerful and slamming motifs, tempered or intensified by reedman Mark Harris' free or chamber-based parts and solos. Johnson's compositions are often geometrically executed explorations, chock full of contrapuntal statements and dizzying treks into cataclysmic storylines and off-centered diversions. On "Thus We Have Made the World," the band enacts a King Crimson-like pace with unorthodox phrasings and avant-garde style subplots, coupled with soaring cadenzas and deep valleys. Here and throughout, the musicians' nonconforming modus operandi includes fairytale backdrops and futuristic stylizations led by di Falco's multipurposed vocalizations.

"The Great Leap Backwards" commences with dour progressions, subtle background effects and a host of abstracts paralleled by the vocalist's angelic choruses and Harris' weaving soprano sax lines, leading to crash and burn episodes. And "A Dirge for the Unwitting," is a cerebral electro-acoustic piece, constructed with linear unison passages, avant-chamber dialogues and a great deal of sound-sculpting activities. Indeed, the band surges forward with another mind-bending program that offers more than your typical prog rock fare, and that's where these folks excel on a recurring basis. Hence, the element of surprise generates a horde of intriguing variables.

The Echoes of Their Cries; Thus Have We Made the World; Commuting to Murder; Hoping Against Hope; The Great Leap Backwards; A Dirge for the Unwitting.