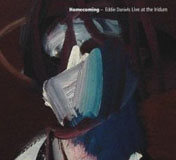 The homecoming in the title of Eddie Daniels' new album refers to the first New York club appearance in two decades in 2006 by the Brooklyn-born clarinet virtuoso, who's made his home in New Mexico for more than a decade. The live two-CD recording from Iridium—just five blocks from Daniels' alma mater, the old High School of Performing Arts—also highlights a return to an instrument he's played infrequently in recent years, the tenor saxophone.

Joined by West Coast cohorts Tom Ranier (piano) and Joe La Barbera (drums), along with New Yorkers David Finck (bass) and Joe Locke (vibes), Daniels plays up a storm on both instruments, proving his tenor chops on surprisingly fast and furious versions of "Falling in Love with Love and a Coltrane-inspired "Night and Day. He slows things down for a heartfelt take on Ellington's "Warm Valley that evokes one of Duke's great tenor players, Ben Webster.

But it's the clarinet that remains Daniels' bread and butter and he reminds listeners throughout the album why he's been one of the top jazz (and classical) performers on the instrument for decades. For an example of Daniels' sheer virtuosity, check out his explosive playing on "That's for Afta, a burner based on the changes of "After You've Gone. For a taste of his harmonic inventiveness, give a listen to "Deja Vu MJQ, an elegant reading of Roger Kellaway's homage to the Modern Jazz Quartet. The MJQ influence is present throughout the recording—indeed he says his vision of his sound is "the Modern Jazz Quartet along with clarinet —most obviously on an inspired fourteen-minute version of the group's classic "Django, with beautiful contributions by Locke.