By Jeff Winbush
February 10, 2018
Sign in to view read count 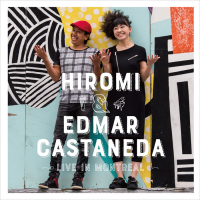 Here's a good rule of thumb to consider when reviewing a jazz record and by that, I mean any jazz record. Jazz music is live music so if it sounds good in the studio will it sound even better on the stage? In other words, if you're willing to pay $50 for a ticket, you're probably not getting burned spending $15 for a record.

Of course, if it's a live album and Hiromi & Edmar Castenda/Live in Montreal is a live album just like it says in the title, so disregard the previous paragraph and consider this instead: do you wish you had been there?

Not this time I don't. When you can do nearly anything on your chosen instrument, the temptation is to try anything. This can lead an artist to some rather interesting places because when it works the results can be gratifying and enriching. The inherent risk is when it doesn't work, the end product can be a jarring misfire or an unmitigated disaster.

Hiromi & Edmar Castaneda: Live In Montreal is neither of those things. What it is is an experiment that succeeds sporadically more than it fails spectacularly. Hiromi Uehara is an adventurous and restless soul. She does duets with Chick Corea, trios with Stanley Clarke, Lenny White, Anthony Jackson and Simon Phillips, quartets with David Fuzcyzinski, Tony Grey and Martin Valhosa and solos all by herself. A true virtuoso, Hiromi has carved out an impressive career with more killer crossovers, head fakes, Eurosteps and mad hops than a NBA point guard. She can dish the rock, take it to the hole, and knock down the "j." She's bad and she knows it too.

But even Steph Curry occasionally dribbles a ball off his foot.

Here she's teamed up with Castaneda, who opened for Hiromi's Trio Project at the 2016 Montreal International Jazz Festival. The Japanese pianist was blown away by the Colombian harpist saying, "It was a jaw-dropping experience. I didn't realize the harp could create such rhythm and groove." Out of that exposure came a conversation about collaborating and he would go on to join Hiromi during a weeklong engagement at New York's Blue Note Jazz Club.

This collaboration is no air ball, but it tends at times to clang off the rim rather than swoosh through the net. Even when she's not on her "A" game, Hiromi's "B" game is still pretty bad ass. The flaw in Live in Montreal is where she's normally astonishing, here she's just pretty good.

Point of fact is, same as the aforementioned point guard, Hiromi excels as part of a team. One such team was her Trio Project with Phillips and Jackson where six years and four albums composing some of the most vibrant and thrilling jazz fusion since Weather Report was a thing. You get the best out of Hiromi, when she has other musicians who can both keep up and push her harder.

Phillips' drumming and Jackson's bass got that from her. A harp does not. Call it eclectic or exotic, but a harp does not command attention, does not funk, does not rock, does not jazz. A harp is pretty, but it does not stand-out as a musical instrument. Personal tastes only and your mileage may vary. No shade on Casteneda's skill set; he extracts sounds from his instrument which defy expectations of what a harp is supposed to sound like. It's interesting and at times like "The Elements" suite the combination exceeds those expectations, but for this reviewer's ears it is not going to spark a revolution where street corner musicians playing for spare change toss their saxophones in the trash and pick up the harp.

Hiromi has never made a flat-out bad record and still hasn't, but there's nothing here which to make Live In Montreal the definitive go-to album her discography. This is the sound of the young artist in a holding pattern between what has gone before and what comes. Boilerplate product this is not. What it is an adequate placeholder.