By BRUCE LINDSAY
February 9, 2015
Sign in to view read count 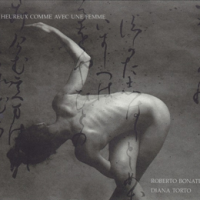 There are few musical things as exciting as a top-class vocalist fronting a full-on big band. Just a few. One of those is a top-class vocalist paired with a single, equally talented, instrumentalist. Heureux Comme Avec Une Femme provides that form of musical excitement courtesy of Italian double bassist and composer Roberto Bonati and vocalist Diana Torto.

It's rare to hear a vocalist capable of the intensity that Torto can muster: rare, also, to hear the double bass played with the ferocity of which Bonati is capable. Put the pair together and the music they produce comes across with an almost palpable strength. Bonati is in full command of his instrument—his arco playing is especially impressive, moving from classical to folk to jazz influences, at times within a few bars. Torto favors wordless vocals on all but four songs, but even without lyrics she can capture and communicate the mood of a composition.

This intensity is clear from the first notes. On rare occasions Torto's vocals—most notably at around two and then seven minutes on "Cinque Petali Di Una Primavera"—come across as too strident, her virtuosity admirable rather than affecting. Such occasions soon pass: her impassioned performances are heartfelt, genuinely responsive to Bonati's writing and, paired with Bonati's bass, with tremendous emotional impact.

The album opens with "Ark," Bonati's sonorous, low, arco notes soon joined by Torto's clear and pure wordless vocal. There's an almost hymnal quality to the song but the mood seems more fearful than celebratory. "Can Vei La Lauzeta -The Song"—the lyrics are by the 12th century troubadour Bernard de Ventadorn—is a song of unrequited love (the album also includes "African Lauzeta," a variation on the theme which also uses de Ventadorn's words). Torto and Bonati give it a suitably lovelorn treatment, with voice and bass both connecting with Ventadorn's tale of woe and demonstrating that emotional responses can easily transcend the centuries.

"Woman Of The Woodlands" is a mysterious and unsettling song, Bonati's lyrics telling of a blue-eyed, long-haired woman who "lives her solitude" in the woods. Bass, percussion and voice come together to create a world filled with imagery—a tale that W.B. Yeats could be proud of, a song that lingers long in the memory. "Une Confiance De Lascaux" also comes into the "unsettling" category, a conversation between ancient spirits, perhaps, given the title's nod to the Paleolithic Lascaux caves.

These intense, powerful, performances do give way to lighter moments, although many of these, such as the gorgeous "Malvarosa," are notable for their melancholy moods—and "Malvarosa" itself features an intense mid-section. Torto's joyous whoops on the sprightly "Girotondo"; the fast-tempo, middle-eastern tinged early sections of "Rouge"; the slow, sensual "Heureux Comme Avec Une Femme" with its lyrics based on Arthur Rimbaud's 1870 poem "Sensation" all evidence the duo's talent for evoking brighter and more romantic images. The emotional range and passionate musicianship on display on Heureux Comme Avec Une Femme is striking.