By Tyran Grillo
December 26, 2017
Sign in to view read count 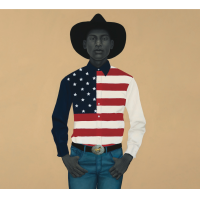 To sing wasn't why we were there...
What it was was names tore loose, took wing, what
World had been ours theirs now, sound itself...
—Nathaniel Mackey, "Song of the Andoumboulou: 138"

I may not know from which depth of her soul Alicia Hall Moran summoned Here Today, but I do know that it will negate any and every imposter who tries to take its place. This follow-up to 2015's Heavy Blue (see review for All About Jazz here) is a baptism of solitude for the communal mind. In it, the listener becomes the listened-to. Moran has folded the razor blades of our current malaise back into their handles, but not before wiping them clean with her voice. As no other keeper of songcraft, she makes the familiar seem newly discovered and her original material—of which this album is mostly comprised—like it has existed since a time when the prophets treaded arid earth. This is her desert.

Here Today is as much of one mind and body as it is of predecessors whose names remain ignored under the categorical flourish of academia's pen. Yet Moran knows that so long as she survives to sing, she must acknowledge those who sing to survive. Toward repaying the blessing of doing so, she compresses mounds of historical dough into a single food to nourish her opening statement, "Signed, Sealed, Delivered," which balances the hit single on the "Habañera" earworm from Carmen. It's a telling juxtaposition, one that acknowledges worship of Georges Bizet's operatic body as an idol of unrighteousness and the terms of surrender underwritten by Stevie Wonder's professions of love. In this forging of signatures—one in the trembling hand of a European colonizer, the other of an American icon—she sews two spirits in the shadow of the popular canon.

But then something happens. You begin to not only hear echoes of that Habañera, but also feel them. The frequency of their recurrence points to an underlying theme of violation. Two originals, "I Am the Fire" and "Love Hurts," are living testaments to the physical assaults intrinsic to our most beloved melodies. The abreaction of Moran's response shores up the tide of factory-made music, and outs the abuses hidden by its veneer. She knows that to call the traces of said abuses "scars" would be to borrow the language of the perpetrators who inflicted them, for such a word ignores the daily onslaught that disallows the healing process.

Offenses, however, are never only physical; they are fundamentally psychological, and convenient targets of misrepresentation. Unlike Carmen's theatrical allure, eroticized as a vestige of her homeland yet actually a rehearsal of her severance from bondage, thoughts belong to real people living in real places, whose lives are cursed by the butterfly effect of men in dimly lit studies. And while they're busy inhaling the fragrance of leather, tobacco, and ink, the ones they demean from afar are nothing more than touchpoints for their pleasure. Case in point is "Oklahoma Girl," in which Moran peels away the decal of Beach Boys mythology from its contact sheet of fantasy and repositions it safely in slumber. Whether holding her grip on the wrist of culture or location, she records every change of pulse.

Another leitmotif of these songs is their fragmenting of self. It is both actual (in the multi-tracking) and metaphorical (in the lyrics). In this respect, "Feeling Good" functions as a self-reflective call and response, while the gospel of "Two Wings" unites in one flesh. Two tracks later, "Roun' About de Mountain" undoes those same parameters. On paper, and in light of her training, one might expect Moran to take a classical approach to this spiritual, when in fact she turns away from Florence Quivar and pours as much of her own fire as possible into a free jazz swirl. "Who Are You?" further confounds expectation by cracking a troubadour's head open and beating the yolk with a whisk of hurt as a warning to those who would confuse infringement with affection. Whenever harmonies come together in this climate, we know that Moran is reconciling two selves: one she presents to the very society that tries to wrangle her, while the other she shares with brothers and sisters who keep the cages at bay. Every black woman, she seems to say, knows what it's like to be a split infinitive.

So, too, is she a bearer of resistance. Moran's "Gold" and "Not Today" are flowers that bloom despite, and because of, the struggle. The latter is her crown song, a queenly rite of passage into righteousness. Similar notes of reconciliation make "We All Just Live in the World" more than an escape, but an ode to maternal perseverance. Even her interpretation of Billie Holiday's "God Bless the Child" forges its dreamy arrangement in the flames of parenthood. But as a citizen in transit, she finds herself on the "2 Train to Wall Street," singing an urban hymn reborn in "Black Wall Street." Both songs drop their wisdom as if it were a microphone that generates its own electricity. Between them we encounter the album's core: "Metal." This is not a song, per se, but a reminder nonetheless that songs never die. Accompanied only by the relic slave chains from his museum collection, cultural historian Gene Alexander Peters puts voice to what has been implied all along: "This is the existence, this is us." In repeating this statement, he has seen the bet placed by writers of history and raised them a dose of their own medicine. This is something that so-called mastery can never trump: the genetic memory of a time when iron links stretched far across oceans to wrestle with flesh rendered equally in God's image.

The contributions of Moran's accompanists are as potent as they are sparse. A string trio (violinist, Chala Yancy, violist Lorenzo Rundo, and cellist Francesco Parente), a jazz trio (guitarist Brandon Ross, bassist Melvin Gibbs, and drummer JT Lewis), guitarist Thomas Flippin, along with husband Jason Moran and the leader herself on piano, are the inhale to her exhale. They are like a cat's whiskers picking up on every unjust change in circumstance, funneling their biological data into the closing "Higher," which balance-beams along the border of materiality and immateriality, a farewell to lovers who are haters.

Audre Lorde once said that "the master's tools will never dismantle the master's house." These often-quoted, rarely pondered words feel more relevant than ever, and to them Moran has added her own: ..."but you can render those tools useless by your art." With this album, she has grabbed a frayed thread of the nearest flag and unraveled it one symbol at a time. As spoken by Amy Sherlald's cover painting, it's a recognition of what is being forgotten behind the image—that rawest of ores needing no cutting or polishing to be precious.

Here today, yes, but by no means gone tomorrow.

Signed, Sealed, Delivered; Oklahoma Girl; Feeling Good; Gold; Not Today; God Bless the Child; I Am the Fire; Two Wings; We All Just Live in the World; Round About de Mountain; Who Are You?; Love Hurts; 2 Train to Wall Street; Metal; Black Wall Street; Higher.