By DOUG COLLETTE
December 10, 2005
Sign in to view read count

Live at Woodstock, as full of color, vision and intensity as it is, may be the clearest illustration why Jimi Hendrix's death was such a tragedy. 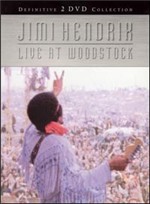 One of the greatest ironies of Jimi Hendrix's career is that his set at the Woodstock Festival—one of, if not the most, notable live appearances in his brief history—was performed before a fraction of the total audience in attendance at the fabled event. The newly-released two-DVD edition of this Hendrix show puts this defining moment in an even more favorable light and actually places the festival itself in a different perspective.

Adorned with a banner on its glossy color front cover that reads "Definitive Collection. this comprehensive production actually lives up to its title. Startling in both its video and audio clarity, this double-DVD is nevertheless more than just another remaster. In enlisting the aid of the original film editor and gaining the rights to an independent recordist's shots of Jimi's heralded performance (never before see due to official film crew lapse), the producers of this package—Janie Hendrix and John McDermott along with esteemed Warner Brothers film restoration specialist Bill Rush— provide every sight and sound to a presentation that, with positive revisionist hindsight, now is as courageous as it is striking.

Hendrix debuted a new band at the biggest concert of his career. His lack of interest in such dated tunes as "Fire is palpable, but the inclusion of new instrumentals, the blues he could always enjoy("Hear My Train A Comin'", "Red House") and, of course, his profound take on "The Star Spangled Banner take on new meaning. Yet songs old and new tell a story, lines from "Purple Haze and "Hey Joe as meaningful at this pivotal point in Jimi's evolution as newer songs such as "Isabella and the opener "Message to Love that carry a more mature and contemporary ring.

It's just another irony that even in this up to date digital form, with the audio as deep and full in its own way as the remastered video, fully half of Hendrix's band is inaudible: both percussionists and second guitarist Larry Lee might as well have not been onstage. In contrast, bassist Billy Cox reveals himself to be the ideal bassist for Hendrix, his lines as fat as they are fluid, while Mitch Mitchell is a monster on drums, his heavy kick and otherwise busy attack a counterpart to Jimi's guitar work. As the latter-day Experience, these three constituted a true unit where counterpoint and harmony were as important as pure visceral impact.

The same might be said of this video editing. The concert footage as contained on the first disc(now with six tunes not included on the previous DVD) is as colorful as the music, angles of the band and Hendrix in particular re-cut to heighten the dynamic and intensity of his set, almost as if you were onstage, mesmerized by one interlude of playing after another. And, in actuality, the complete performance presented on the second disc, subtitled "A Second Look," is an interweaving of the original 16mm footage filmed at Woodstock with the B&W recording captured in guerilla style onstage by a spectator: stylishly cut in time with the music, minimizing the technical shortfalls of the open reel tape, the amateurish quality of that footage matches the occasionally rough performance of the group—Hendrix's cues are many, especially during the instrumental "Jam Back at the House —and actually magnifies the sterling remastering of the color film.

Interviews of the band members and recordings of the events just before and just after the event heighten the significance of Woodstock for Jimi Hendrix. That he could not bring to fruition all the ambition inherent in this project makes his untimely death all that much more of a tragedy. But Billy Cox is as enthusiastic in his recollection of he and Larry Lee's early days on the chitlin circuit as he is reverential in his description of Hendrix's special aura. Producer Eddie Kramer's description of the ramshackle equipment put together to record Woodstock is no doubt more on target than his description of the musicians as being ever so friendly: if you've read any accounts of backstage wrangling over payment for performance, he sounds a bit disingenuous.

And while Woodstock producer Michael Lang comes across as a bit too whimsical for his own good—Roy Rogers as closing act for this monumental festival?—Hendrix himself remains poised in his interview two weeks after the event in announcing a benefit concert in Harlem. This interlude suggests the complexity of the man, especially after you see the boyish delight he radiates when on stage, alternating with the role of stern bandleader for a musical line-up just in its infancy.

The relatively subdued "Villanova Junction that concludes the set proper is, like so many Hendrix ballads, a real keeper: like the nouveau jazz-rock fusion of "Woodstock Improvisation," it suggests just how many directions Jimi would have been capable of pursuing had he lived. We should consider ourselves fortunate to have been alive at the same time as this young man.