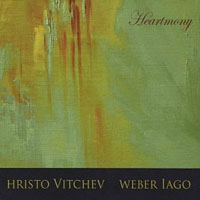 Surprisingly few piano and guitar duos have been recorded in the jazz genre. Perhaps it is that the instruments work together best when the music is highly nuanced and, frankly, nuance can be boring. Bulgarian guitarist Hristo Vitchev and Latin Grammy-nominated pianist Weber Iago have managed to avoid the abyss of ennui very nicely on Heartmony, a collection of original pieces that are both urbane and appealing.

The two opening ballads, "Under Trees of Color, Over Fields of Grey" and "Musica Humana," combine chamber jazz expressionism and harmonic invention. Vitchev works in both electric and acoustic mode, creating different sonic characteristics with fluidity and intricacy. Iago's classical influences are sometimes flickering, sometimes intense. He creates a pastoral setting that evokes Aaron Copland's Appalachian Spring. Both Vitchev and Weber play as extensions of each other, individually and collectively guiding each piece with increasing but subtle complexity.

"Crepuscular Rays" is anchored with acoustic guitar while Iago plays multifaceted improvisations. The duo trade the lead before Iago wraps up the piece with some overdubbed wordless vocalizing. "The Farewell" is a three-part suite that begins with the slow, stately "Prelude to an Act of Departure," which segues into the melancholy "The Imperative Expression." The third part, "And May We Meet Again," is the collection's most upbeat piece. Here, Hristo uses his acoustic guitar as a percussion instrument while Igor demonstrates his ability to play with speed and dexterity without sacrificing lyricism.

Vitchev and Weber, having played together in larger groups, have clearly developed an ease in playing sophisticated and appealing music that is far more complex than it first appears. They skillfully suppress and build momentum within rich, shadowy twists of their main theme. As structured as Heartmony is, it is necessarily structured to keep a proper balance between the technical and the expressive. Nevertheless, these are compositions in which improvisation is as prevalent as the profound musical and harmonic insights.