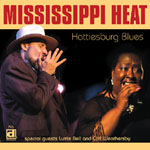 Varied is the word on this one, even whilst the music retains a cohesive feel. Pierre Lacocque's harmonica is notable for its singularity, and he heads a rolling cast of musicians in the realization of his original compositions plus one from Denise Lasalle, amongst others.

The music is clean and dirty at the same time. This take on Chicago blues is permissive of variations on the formula theme and they're mostly welcome. "Light From Within" exemplifies how the band can handle a slow tempo at the same time as they give up nothing in the way of dynamics. Singer Inetta Visor comes into her own on this one, coming on like an amalgam of Doris Duke and how Ma Rainey might have sounded had she been born decades later. In his guitar work Carl Weathersby nods to both Albert King and, in a fashion closer to the source, Otis Rush.

On the first couple of listens the dinky syncopation of the title track grates a little but then the truth kicks in, aided in no small part by Lacocque's harmonica and the proof it offers of how much he could thrive outside this strictly blues context. Visor shows how she can handle lamentation, with the very timbre of her voice enhancing the lyric.

"Chicago Is My Home" has Lurrie Bell on it and the glorious defiance in his voice and succinct edge on his guitar proves how much he's taken in the likes of—appropriately enough—Magic Sam. The band's right with him too, bringing that realization of the down home and the urban to the fore in unequivocal terms.

Giles Corey's guitar on "Forgot You Had A Home" brings the smallest side order of Grant Green to proceedings, even whilst his phrasing is considerably more pronounced. Visor shows again how she has the innate ability to stay on the right side of the overblown.

It seems very easy these days to do this sort of thing very badly. That's not the case here. With talk of recession in the air this is the blues put out at a time that's right for it, with the enhancement of some really colorful horn charts.

Tiger Man; Chicago Is My Home; Forgot You Had A Home; How Much Worse Can It Be?; Soft-Hearted Woman; Hattiesburg Blues; Gone So Long; Light From Within; Calypso In Blue; Hell And Back; Say Something Good; Foolish Man; Nature Is Cryin