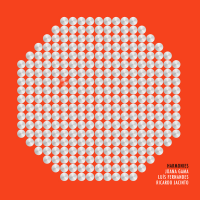 Jacinto advises that "Harmonies was a commission from Teatro Maria Matos, to which other theatres in Portugal joined as co-producers. This was a celebration on its own to Satie´s music and work. The project was originally a stage performance where music and scenography were strongly articulated. Later we decided to record the original music that Joana, Luis and myself wrote for this performance."

"Memories en forme de Vexations" is designed with EFX and cello dialogues that can tantalize your neural network amid some angst, digitized rhythmic sequences and a reverberating chord sequence, where the band toggles between rambunctious and interrogative interplay that is either organic or steely during various intervals. The final piece "Sortie en forme de Panthee" features a lightly clanging and jangling electronics pattern that generates semblances of an ancient tribal ritual fed through Midi components amid Gama's ethereal phrasings and a backwash of Fernandes' sonic treatments. Indeed, it's a contemplative and magnetic mission that produces ample amounts of brain food, equating to a highly engaging viewpoint of Satie's enduring legacy.