By C. Michael Bailey
November 16, 2019
Sign in to view read count
This is the best class of Messiah releases that I can recall in many years. All are imports and may take effort locating, but each of these has their own undeniable charm. Il caro Sassone rests easy. Hallelujah, indeed! 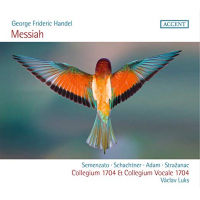 Crisp, brisk, and almost frantically presented, this Czech performance of Messiah stands as one with the greatest velocity on record, competing with both McCreesh (Archiv, 1997) and the Scholars Baroque Ensemble (Naxos, 1995). The sheer pace of this recording may leave some listeners breathless, but they will be rewarded for hanging in there. This is no ordinary Messiah. The quick pace is maintained uniformly throughout this assimilation of two live performances from March 2018. Founded in Prague in 2005, by harpsichordist and leader Vaclav Kuks, Collegium 1704 and Collegium Vocale 1704 became part of the Bach-Prague-2005 project, inaugurating a biannual collaboration with the Prague Spring Festival. This recording expresses a consistency across the entire oratorio that is more integrated and accurate than many of the recordings of the past decade. The sonics are simply spectacular. The live nature of this recording adds a nourishing layer of drama to the presentation, used to full advantage by baritone Kresimir Stazanac who tautly presents "For Behold, Darkness Shall Cover The Earth" with humid, crepuscular grace that is more Aeschylus' awful Grace of God than Augustine's account of God's Divine Mercy. How fortunate we are to have this (and these) fine readings. 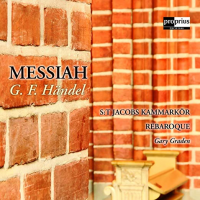 A pleasant surprise from Sweden. Rebaroque, formerly the Stockholm Baroque Orchestra and St. Jacobs Kammarkörunder, under the leadership of Gary Graden, produce a thoroughly scrubbed, organic Messiah brimming with extroversion and powerful mirth. There are actually two performance narratives occurring here. One is the overarching history of the oratorio's development and early performances and the second, closer to home, is the history of performance in Sweden. This recording captures Messiah performances in the years since 2011 in Stockholm. This recording is taken from three performances occurring in late November 2016 and readily reveals the expression of a close collaboration between choir and baroque orchestra. With jaunty precision, the Symphony opens with organ. It would be easy to imagine Handel, a superb organist, leading the performance from the instrument. The segue into the strings is both subtle and powerful. The soloists are all top notch with tenor Michael Weinius singing with militant earnestness. This oratorio continues to provide fertile ground for newer, more daring interpretation, this being one of the best. 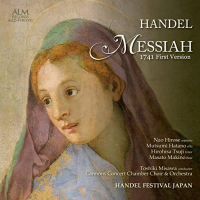 This recorded performance of Messiah is a bit of a mystery. The Cannons Concert Chamber Choir and Orchestra have as little digital footprint as does conductor Toshiki Misawa. Touted as part of the "Handel Festival Japan," which does have a digital footprint, this particular interpretation is based on the first version written in 1741 and never performed by Handel during his life. Rarely is this version performed today. This alone makes this particular treatment special. The instrumentation and sonics of this performance are out of this world. The tempo is on the slow side, accentuating the instrumental articulation cooly captured digitally. The soloists are muscular and precise with the only a note of the accented English delivery that many critics found troublesome in Masaaki Suzuki's Bach Collegium Japan recording (BIS, 1997) as well as his Cantata Cycle. In spite of this quibble, the performance is exceptional and very much in keeping with many pre-1980s, modern instrument and practice recordings. The sonics are crystalline and sharply defined, giving the oratorio a robust sound and presence. This is an informed and informative production of Handel's masterpiece before it became his masterpiece, deserving close attention for its full appreciation. Enjoy! 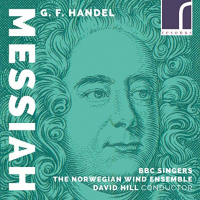 This recording is the first of two Messiah arranged for wind ensemble. Historically, Handel's masterpiece has existed lacking a single, definitive performance edition. In his lifetime, Handel modified performances to fit both available instrumentation and singers. In the 19th-and 20th-centuries, conductors employed everything from slim ensembles and choruses (think of the period-performance craze of the 1980s) to casts of thousands with augmented orchestration (Think of Sir Henry Wood's 1926 Handel Festival performance, sporting a choir and orchestra of 3500), to a point where the critic George Bernard Shaw queried, "Why, instead of wasting huge sums on the multitudinous dullness of a Handel festival does not somebody set up a thoroughly rehearsed and exhaustively studied performance of The Messiah in St. James Hall with a chorus of twenty capable artists? Most of us would be glad to hear the work seriously performed once before we die." All this to point out the durability of this most popular piece of classical music. This present performance was arranged for wind ensemble by the performing Norwegian Wind Ensemble's (a period instrument ensemble ) trumpeter Stian Aareskjold. The qualitative result is a rounder, more plush orchestral sound that is very subtle and appealing. The soloists all possess a certain sweetness really attractive in their application. Don't be put off by a change of orchestration. Be glad that we can hear this presentation with clear and receptive ears. 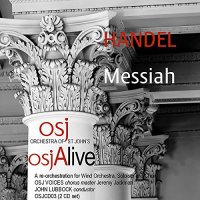 This is the second of two Messiah arranged for wind ensemble. This particular arrangement was conceived by conductor John Lubbock in 2015, scored for flutes (2), oboes (2), clarinets (2), bassoon (1), cello (1), bass (1), trumpets (2), tipani (1), and organ. The qualitative difference to Hill's performance with the Norwegian Wind Ensemble is one of magnitude. Lubbock prefers scaled back instrumental forces while employing a larger chorus. Recorded live, there is an organic immediacy that is fresh and exhilarating. Lubbock's direction yields a lively and fertile performance that is robust and full-bodied. The soloists are equally robust, with tenor Chirstopher Turner providing the most satisfying performance of all the recordings considered here. I can only imagine Il caro Sassone smiling, with a glass of wine, hearing this.