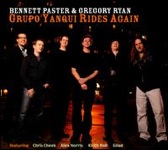 A shared love for Latin music is what drives the partnership headed by pianist Bennett Paster and acoustic/electric bassist Gregory Ryan, known as Grupo Yanqui. Formed in 2001, the like-minded associates combine the musical influences of Afro-Cuban and Brazilian rhythms with an American jazz perspective. Grupo Yanqui Rides Again, the ensemble's second release, features clever composing and arranging from the two leaders along with first-rate musicianship.

There's an abundance of energy emanating from this disc. The opening "Tones for Jones Bones" finds trumpeter Alex Norris blowing through the Chick Corea classic with conviction and finesse. The tune's extended outro contains an impressive piano/bass ostinato pattern over a spirited back-and-forth between drummer Keith Hall and percussionist Gilad. Norris and saxophonist Chris Cheek partake in soulful blowing exchanges on Paster's funky "The Unabonger" and Ryan's fiery "If Woody Had Gone Right to the Police..."

Ryans' "The Chick from Panama" and Paster's 5/4 cha-cha-cha "El Vaquero Numero Cinco" reveal a pair of composers with a thorough understanding of the Latin jazz vernacular, full of contemporary twists and turns. Disc highlights include Paster's clustered montuno pattern on "The Kid from Albuquerque," complimenting a soaring, lyrical melody and Ryan's emotive solo bass intro to the 6/8 modal closer "PoMoAfroMoFoJo."

Grupo Yanqui succeeds at presenting challenging musical ideas with broad-based appeal. The pulsating rhythmic clarity of each track has the potential to reach a mass audience without sacrificing an ounce of musical integrity.

Tones for Jones Bones; The Unabonger; The Chick from Panama; If Woody Had Gone Right to the Police...; El Vaquero Numero Cinco; The Kid from Albuquerque; Chelsea Bridge; PoMoAfroMoFoJoIntro; PoMoAfroMoFoJo.