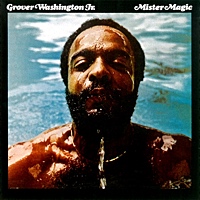 For anyone who enjoys taking bites from the now forbidden fruits of jazz, smooth jazz has probably crossed your palate once or twice. Just as rock music fans treat adult contemporary with certain disdain, so do jazz fans in regards to smooth. It is certainly easy to see why. The arrangements are flooded with lush pop undertones and probably even worse; the music lacks jazz's guttural attack. Smooth jazz self-destructed in a storm of cheesy synth and repetitive drum machine beats during the '80s... remember some of David Sanborn's later records—1988's Close-up—or the horrid comatose of Kenny G?

Before all this smooth had been an interesting and driven alternative to fusion. Once the sugar coating is stripped away, the chops are often solid. What we have forgotten is smooth featured some killer players who would be great regardless of their chosen genre. With that idea in mind, we as jazz fans need to revaluate some of these records. There is no better representative than the late Grover Washington, Jr.'s 1974 masterpiece, Mister Magic.

The first record for anyone looking to hear a positive example of smooth is all here. Fused an R&B groove that is produced and arranged by future smooth mogul pianist Bob James, Mister Magic was a spotlight for one jazz's great saxophone players. Washington absolutely breathed a fluid and caressingly powerful style that was unique to him. Since the style called for easy playing, he could sit back and let the chops glide like water flowing down a river. His melodies and tone are always first rate, but there was a certain magic, if you will, to what this record has said about its artist. Many of the smooth players relied on the direct approach to playing and soloing, but Washington allowed his himself room to open up, and this where his music has the most to offer to the rest of jazz fans. Sure the polish is on there, but the solos are not afraid to take flight either.

The title track harnesses the chrome plated polish of this genre's sound and lets in the tasty bits. It starts out with a funk groove-did someone say Head Hunters?-and slowly builds into some finely gnarled solos by Grover and guitarist Eric Gale. It was a crossover hit that grooved the light rock AM crowd of the '70s and is still a great spin today.

This record is a lighter approach for those who are not willing to check the harder edged sounds that are deliciously spread over Steely Dan's records, but these jazzites don't need rock mixes. If you are still thinking I might be crazy, just think back to the 1980 hit with Bill Withers, "Just the Two of Us," on Washington's Winelight. Godammit, you want to blow it off as easy listening light rock, but that solo is mind blowing. There is a lot more where that came from. Just open up and let the light fluffy background groove fly away and you will be rewarded for your time with Grover Washington because he was truly one of the best we had.