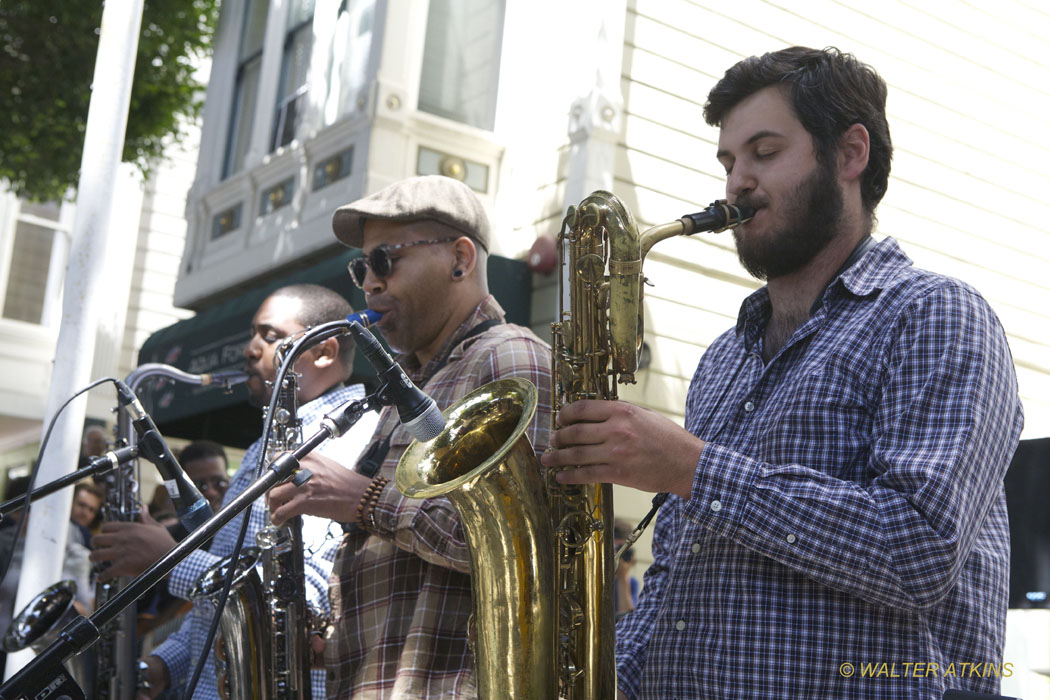 San Francisco's 33rd Annual Fillmore Jazz Festival was a huge, funky street party celebrating numerous music genres, ethnic foods, crafts and more in the city's historical and culturally rich Fillmore neighborhood. This year's edition of the FJF, running between Eddy and Jackson streets on Fillmore, also commemorated the 50th Anniversary of San Francisco's world famous 1967 Summer of Love phenomena. The FJF's theme, "Summer of Love Revisited," was a pleasant nod to the social currents and events of the pivotal mid 60's in the City. It was where music by iconic artists like the Jefferson Airplane, Sly and the Family Stone, Credence Clearwater Revival, The Grateful Dead, and Santana, flourished while shaping and influencing future generations. The hip stylized post psychedelic poster, featuring a young woman with full Afro and bell bottoms playing her saxophone, complemented this year's festival theme. The purple hued posters and smaller post card versions were in big demand, especially by visiting musicians and tourists.

One of the many FJF's long time favorite artists was the band Groove8, based in Charlotte North Carolina. Their blend of funk, jazz, rock and world music has endeared them to festival regulars for thirteen years running. Several visitors mentioned they looked forward to seeing the band every year, and considered them a must see at the yearly July event.

When G8 made their annual pilgrimage to San Francisco's FJF, the band also played scheduled gigs at blues luminary John Lee Hooker's Boom Boom Room in the evenings. Great music and food affairs tended to bring out the spirit of the city. The accommodating sound guys from the Boom Boom Room were on hand before and during the date to help tailor the swirling sounds. A helpful SF Police Department officer even provided some timely assistance with hanging the Groove8 banner. G8 launched into their set with powerful, soulful original compositions including "Time And Place," followed by "Toast and Jam," "Groove Brew," the killer 'Curious Poses," "The Dream," "The Stand," "Biomorphic Nameology," "Can't Get Over Myself," and a rare cover- the Meters' classic New Orleans track "Sissy Strut."

People were dancing on the sidewalk in front of the band, while others standing or sitting on adjacent stairs nodded to the powerful polyrhythms filling Fillmore street. When a young couple from Spain started dancing to the G8 sound on "Sarasoul," the sizable audience became more engaged and the feedback spurred the band. In another testimony to G8's loyal fan base, two women drove over five hours from Los Angeles to listen to them. Debbie, a SF resident said, "The drummer, I love the complexity of the drummer. Just flatten out the sound and you just hear it. I like to listen to the back sound underneath."

While waiting in line at the pizzeria a few doors up, a couple from Amsterdam on their flight layover at SFO, made a spontaneous decision to visit the boisterous festival. They shared how much they enjoyed it and how it reminded them of European music events they experienced.

After their two Saturday afternoon sets, a resident admirer wearing a Groove8 T-shirt said he came to the FJF to hear the riveting band all the time. "They're my favorite band of the festival," he happily stated to this photojournalist. The entire band also insisted on posing with a stately elderly man who owned all their albums. He was one of the first to attend their FJF shows and Wheatley introduced him as, "One of our biggest fans."

The long running Fillmore Jazz Festival, hosted by The City of San Francisco, was one of the largest free festivals on the West Coast with good reason. The combination of sights, sounds,and smells made it an irresistible concoction for fun, food and enjoyment. With outstanding artists like Groove8, the FJF will be going strong for years to come.