BY DOUG COLLETTE
July 24, 2017
Sign in to view read count
In observation, analysis and overall discussion of Burlington Vermont's vibrant music scene, the jazz demographic is all too often overlooked. But the vibrant undercurrent of the genre in the Queen City is like that which bubbles under in our culture at large, always present, usually noticeable with careful perusal but otherwise hard to highlight outside its devoted fans (or the annual ten days of the Discover Jazz Festival), without concerted focus. Bassist/composer Robinson Morse and saxophonist/composer Brian McCarthy are two of the most devoted practitioners of their respective arts in this resilient community and, based on both of their latest recorded works, the two musicians/composers/bandleaders have not only learned their lessons well , but rigorously taught themselves how to persevere productively in the somewhat constrained but ultimately nurturing environment they constantly help sustain. 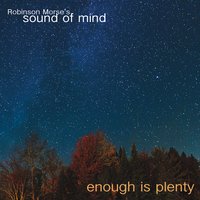 Rather than just wordplay too clever for its own good, the name of bassist/composer Morse's band and the title of their album is a direct reflection of the ingenuity that permeates its music. Similarly, the cover image of a starlit sky above an autumnal treeline suggests the density of arrangements the band navigates with quiet yet gleeful aplomb. Bubbling up in the title track, Max Bronstein's guitar mirrors the articulate instrumental language all these players command, Morse most of all, as a composer and a player: his sense of restraint is as impeccable as his sense of logic and, in the true test of a bandleader worth following, the ten other players in the band, many of whom bring high-caliber pedigree of their own to and from the Burlington Vermont jazz community (like saxophonist and keyboardist Peter Apfelbaum), exhibit their individuality even as they immerse themselves within the collective. Gathering momentum almost indiscernibly by the arrival of "Offsider," horns rippling as percussion pops, the seventh of eight concise tracks illustrates how the music on this record flows naturally, from start to finish.. 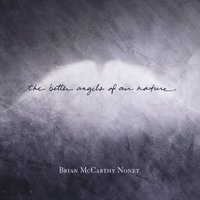 As much as the elaborate packaging of The Better Angels of Our Nature befits saxophonist/composer Brian McCarthy's scholarly stature as an instructor at the University of Vermont, it's an illustration of how, even in this digital age, liner notes matter. The black and white color scheme sets the mood for music that vacillates, albeit purposefully, between the stark and the comforting as McCarthy and co. delicately but assertively mix the dynamics of the material to conjures a tangibly cinematic air (compelling a multi-media presentation some day?). The plush sonics of this recording are impressive on their own terms, too particularly because there's some sense the arrangements don't allow for a great deal of spontaneity; yet the structure by which The Nonet introduces themes for subsequent embroidery by the soloists displays through contrast of the two approaches an intricacy comparable to dense improvisation. With sources for this material ranging from from the 1860's ("Battle Hymn of the Old Republic") to McCarthy's own creative impulses ("Shiloh") the leader's prescience is all the more significant (and laudable) in the highly-politicized culture of today: a concept that crystallized in 2014 radiates an unmistakable social relevance upon which the bonus cut, "All Quiet Along the Potomac To-Night," provides an ideal opportunity to reflect.

The Better Angels of Our Nature

Tracks: The Bonnie Blue Flag; Battle Hymn of the Old Republic; Shiloh; The Better Angels of Our Nature; Battle Cry of Freedom; Weeping, Sad and Lonely; I Wish I Was in Dixie's Land; Oh Freedom; All Quiet Along the Potomac to-Night.