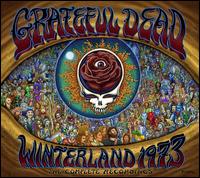 The Grateful Dead's Winterland 1973 - The Complete Recordings appears a little over two years after its original release was aborted a few months prior to the band's business affiliation with Rhino Records was made official. The release of this nine-disc box (plus full-length bonus disc) institutes a new thrust in the archiving of Grateful Dead recordings. In a logical extension from the Dick's Picks series, which focused on complete shows, and in contrast to the recently-inaugurated Road Trips series, which collates highlights from a particular tour of note, the Dead's archivists will now concentrate on extended runs of shows, a progression that mirrors that of the group's fanbase over the years.

The first such title actually appeared in 2005 in the form of Fillmore West 1969 The Complete Recordings. This new box makes an ideal companion piece precisely because the changes it documents so closely mirror those in play earlier. In fact, each set on its own might well be designed to illustrate the Dead's evolution as a band, as performers and as songwriters.

Fillmore West 1969 marks the culmination of an intensely creative period for the Dead. In 1967 the group had added Mickey Hart as a second drummer percussionist as well as Tom Constanten as an additional keyboardist. As the band then forged a relationship with lyricist Robert Hunter, they began their first forays into original compositions ("St. Stephen," "The Eleven"), which in turn deliberately stretched their collective instincts as a performing unit.

The three nights in February at promoter Bill Grahams' famous venue, recorded with the most sophisticated equipment the Dead, via benefactor Owsley Stanley and crew, could provide, were expressly intended to showcase the means by which the Dead had incorporated new material like "China Cat Sunflower" into their setlists alongside roots material like "I'm a Kingbee," as they strove to dovetail tunes for maximum musical logic and impact on the audience.

The Grateful Dead circa 1973 extended the progression. By this time, Bill Kreutzmann had been manning the drums alone for almost two years, following the abrupt departure of Hart. Founding member Ron "Pigpen" McKernan had passed away early in the year, at a point keyboardist Keith Godchaux had become firmly ensconced within the group—listen to his aggressive comping during the 11/10 "Weather Report Suite"—as had his wife Donna Jean in bolstering the group's singing (as on "Looks Like Rain" from the same night). These personnel shifts correlated with a marked shift in the band's approach to composing and recording earlier in the decade, wherein structure took precedence over open-ended improvisation for the studio work that produced Workingman's Dead (1970) and American Beauty (1970).

It might be said the Dead were suffering an embarrassment of riches when they came to Winterland in November of 1973. They could draw on the material from the aforementioned albums, not the least of which proved to be "Sugar Magnolia" and "Truckin,'" plus the new originals contained within the live album Europe '72 including "Jack Straw" and "Tennessee Jed." The band had debuted their own record label that very autumn with Wake of the Flood (1973), prior to which rhythm guitarist/vocalist Bob Weir had produced and released his solo album Ace (1972), where he used the Dead as his accompaniment, most of which collaborations with lyricist John Barlow, like "Black-Throated Wind," became future setlist staples. In the interim since 1971 as well, titular leader Jerry Garcia's eponymous solo effort had proved to be a reliable source of songs including "To Lay Me Down."

Harbingers of future Grateful Dead studio work dotted the setlists from San Francisco in the form of "Loose Lucy " and "China Doll, " eventually on 1974's

The broad expanse of material lent itself to an equally broad range of dynamics (underpinned by bassist Phil Lesh, the unsung intrumentalist in the lineup) so that, some years before the band enacted more rigid segues between songs and sets each night (post-1976 hiatus), Winterland 1973 exhibits a readily discernible ebb and flow within each show and, in reality, from one show to the other. Invigorated by the songs they are playing, the band generate, then ride one rush after another, the apogee of which waxing and waning may in fact materialize on the final night in the form of over a half-hour of "Dark Star;" here the band utilizes the theme of the tune only as a touchpoint for free exploration, thereby consummating the run as other performers, thinking in much more narrow terms, devise their individual concerts. The circular interweaving of "Playing in the Band," "Uncle John's Band" and "Morning Dew" is only slightly less engrossing.

The packaging of Winterland '73 reflects the dynamics of the music. Garish at a glance in its blue and green color scheme of the cigarbox, within each digi-pak the caricatured drawings of the graphics zoom in for increasingly greater detail for each show, while the set list for the night is printed inside the slipcase of the triple-disc sets. Within a booklet decorated in an equally stylized scheme, band historian Dennis McNally's essay is as full of fact and insight as affection, not to mention the understated announcement of the new angle on Grateful Dead archiving. Prior to HDCD mastering the two-track source tapes had been treated to up-to-date state of the art digitizing that render the audio quality comparable to multi-track soundboard recordings, the process of which is recounted within the booklet as well.

Archivist David Lemieux and engineer Jeffrey Norman created a composite of the Fillmore 1969 shows to coincide with the previous box set, but here a bonus full-length CD, excerpted from a show in Cincinnati early in December, accompanies preorders from dead.net (the only source of purchase for Winterland '73). Seemingly nothing more than professional and pleasant in the early going, a striking interlude of "Space" ultimately renders what precedes and follows in such sharp relief. It recalls the truth of the cliched saying "There is nothing like a Grateful Dead concert." Winterland - 1973 The Complete Recordings thus presents a unique means to ponder and savor the concept of wholes comprising the sum of their parts.