By DOUG COLLETTE
April 26, 2014
Sign in to view read count
With the Grateful Dead's impending 50th anniversary in 2015, the legacy of the iconic band continues to grow. The surviving four members continue to play regularly (with the exception of drummer Bill Kreutzmann) in their respective bands (Phil Lesh & Friends, Bob Weir & Ratdog, Mickey Hart in varying ensembles) with the former two having collaborated extensively over the past few years (in Furthur). Meanwhile, the current archiving of the Dead's vault yields treasures like Sunshine Daydream (Rhino, 2013) as well as the contemporary concert series 'Dave (Lemieux)'s Picks.' In 2011, Real Gone Music began the regular reissue of the group's original series of live titles overseen by the late Dick Latvala. It might be fair to say that, notwithstanding the profound absence of the band itself touring since the 1995 death of titular leader, guitarist/vocalist/composer Jerry Garcia, the Grateful Dead community has never seen more activity than right now. 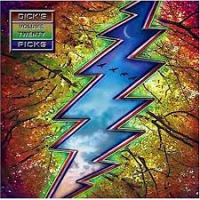 Recorded by Dan Healy in the autumn of the year after the Grateful Dead's self- imposed hiatus, this four cd set captures the better part of two shows with scarcely an overlapping of the setlists. Yet the (last ever) inclusion of "Cosmic Charlie," and a lovely "Peggy-O" balance the duplication of "Cassidy" and "Dancing in the Streets," the latter appearing as the denouement of a massive segue, comprising virtually all of disc four, including the free-form "Orange Tango jam," (so titled for its appearance within a performance in Syracuse, New York). While at this point it was becoming common for Grateful Dead tour stops to represent more than just concerts, both these shows illustrate how crucial it can be to listen closely to the band as they play: ever unpredictable even as their repertoire was increasingly familiar, instrumental interludes, like that on "Sugaree," could be as evocative as the autumn foliage imagery on the cover. 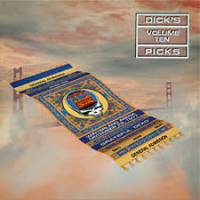 Reproduction of a fan letter extolling the virtues of a live concert series of Grateful Dead shows is understatement to a fault compared to the headily enthusiastic essay written by Michael Nash twenty years after the show itself. Perhaps it's the very site of the concert on home turf or the cumulative effect of the Dead's renewed sense of purpose in the year of release of Terrapin Station (Arista, 1977). More probably, it's the combination of those two factors plus the dates on the calendar that turned transcendent the music and, by extension, the overall experience itself. Having achieved hallowed status within the band's lore (like the 'Dick's Picks' series at large), the recording of this show demonstrates how the Grateful Dead's playing could become absolutely charged by the audience response and vice-versa. 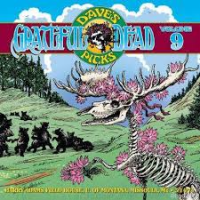 Once considered as the inaugural title of this archive series, this latest edition of 'Dave's Picks' makes (or reiterates) the case for 1974 representing the absolute pinnacle of the Grateful Dead's performing history. The sound quality emanating from the 'Wall of Sound,' here in its third instance of usage, puts the listener right in the midst of the band (a sextet with single drummer Bill Kreutzmann) within a stereo spectrum marked by bassist Phil Lesh on one side and keyboardist Keith Godchaux on the other. It'd seem those impeccable sonics allow the band to deeply immerse itself in the sound of its own playing, thus greatly furthering their exploratory inclinations. Epochal segues such as the linkage of "Weather Report Suite" and "Dark Star" connect the band's history over time and, in doing so, propel them so far outside the structure of the compositions-and away from set pieces such as "Row Jimmy" and Chuck Berry's "The Promised Land"-the improvisations become orchestral pieces in and of themselves. The recording of this complete show is all the more remarkable in how it how it depicts the space the Grateful Dead traverse in (slightly) less than three hours total playing time.