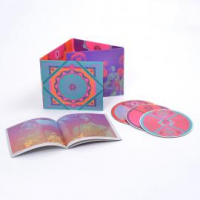 Although an entire book has been published on the phenomenon, Peter Conners' The Music, the Myth, and the Magnificence of the Grateful Dead's Concert at Barton Hall (Cornell UniversityPress, 2017), in his own essay for the booklet in the three-CD package, UCLA archivist Nicholas G. Meriwether offers an excellent summary of the various threads in the story of the Grateful Dead's Cornell '77 appearance, the profundity of which may still escape the comprehension of both fans and non-fans, even if the music hits home with the impact it should.

The Dead's fanbase has as much to do with the recognition afforded this show as the best of all in the iconic band's canon of concerts. But it's also true that this is as remarkable a performance as any in their history, recorded with a sonic quality to match and packaged with a similarly loving attention to detail familiar to collector's of similar items. Intentionally or not, the group positioned itself for the acclamation that's arise around this appearance at Cornell University: the Grateful Dead were not sure the band would continue after it decided to go on hiatus in 1974 and thus immortalized their decision via "The Grateful Dead Movie" (the fortieth anniversary of which was celebrated by the 2017 "Meet-Up at the Movies").

As a result, their return to touring in the spring of 1977 caused a ripple effect beyond their community, spilling over to some degree into the mainstream of American culture. However begrudging, the resulting positive recognition of the Dead's inimitable attraction(s), the impact of which was amplified by the live shows and the eventual release of the studio album they had worked on over the winter, Terrapin Station (Arista, 1977), two dynamics inextricably linked as crucial elements at the foundation of the Barton Hall legacy.

Working under one taskmaster of a producer in Keith Olsen on the recording project instilled a perhaps heretofore unprecedented discipline into the Dead and freed from those constraints, via the live shows, there remained a delicate balance between structure and spontaneity. As a result, even on relatively restrained and concise takes in the six-to-eight minute range fronted by rhythm guitarist/vocalist Bob Weir, that occupy disc one here, the septet has just the right light but firm grasp on "New Minglewood Blues" and "Mama Tried:" there's an almost subliminal swing here, as readily apparent in bassist Phil Lesh's assertive playing as in the elastic mesh of Bill Kreutzmann and Mickey Hart's dual drumming.

Yet, when the Dead decide to stretch out, as they do for sixteen plus minutes on their controversial re-arrangement of "Dancing in the Street," there remains a sense of purpose and direction. Add to that the range of material this tune suggests, on its own terms and as a part of this setlist: Martha & the Vandellas' song was part of their repertoire in 1966, over a decade before this concert and its placement in this performance constitutes a gateway to the more highly improvisational portion of the show. And the fact the septet ends the first set with the Motown tune, sure they can regain their momentum (and in fact do just that), is a combination act of bravery and self-confidence.

Ratcheting up the range and intensity of the collective musicianship with segues that would, perhaps not surprisingly, become de rigeur in their concerts for years to come, the Grateful Dead's juxtaposition and linkage of "Scarlet Begonias"and "Fire on the Mountain" is also one of the most obvious aspects of the choice of songs played on Mother's Day in Ithaca, New York. Overall, these nineteen numbers stand simultaneously as a template for, and a distillation of, the setlists the group would offer their audiences for the next eighteen years; without overdubs or edits, there's nary a wasted note throughout, including but not limited to, Jerry Garcia's lead guitar (and to a slightly lesser extent, Keith Godchaux' piano and spouse Donna Jean's vocals)

To be sure, variations on this theme were constant as the group evolved, through personnel changes and otherwise, But it's fair to say that with the selection of material here, dating back to the earliest pinnacles of the Dead's original material such as "St. Stephen," plus epochal picks from the same period, a la "Morning Dew," and including "Brown-Eyed Woman," from the bountiful early Seventies songwriting phase, the Grateful Dead were fortifying and developing their approach to performance.

At the very same time, they continued to apply a similarly assiduous approach to the audio quality of their shows, even though by this time, due to the exorbitant cost of operations, the group had dispensed with their vaunted 'Wall of Sound.' Their devotion to stellar sonics remained as staunch ever, if not more so, due in large part to the presence of engineer Betty Cantor-Jackson at the soundboards. The clarity of all the instruments and voices becomes readily apparent on Cornell '77 almost immediately, even on the somewhat subdued "Loser." There's a tactile presence to the recording where even the lightest notes and flourishes ring, albeit in direct and constant proportion to the sounds around them, a combination of the woman's technical expertise, to be sure, but also a tangible feel for the music.

It's little wonder an aura arose around her work during a tenure with the Grateful Dead extending into the early Eighties, a mystique enhanced (and ever-so-meticulously described by Meriwether) when a cache of them disappeared from her ownership, re-emerged in the bootleg market in fairly short order and, in a widely circuitous route, returned to the rightful possession of the Grateful Dead organization in recent years.

The assignment of a copy of the Ithaca, New York recording to the Library of Congress' National Recording Registry in 2011 was indicative of the occasion's ascension into cultural recognition beyond the band's community, though arguably as a direct result of its longstanding attention from that idiosyncratic demographic. Having been "deemed so important to the history and culture of the United States," this designation arrived some some ten years-plus after the Grateful Dead's commercial breakthrough to the mainstream with "Touch of Grey," which in itself arrived a decade after the concert in question.

With the official release to the marketplace near the anniversary of the event itself, nigh on four decades after the fact, packaged in a variety of configurations-including Get Shown the Light (Grateful Dead/Rhino, 2017), a larger box of concert recordings from the same tour-Cornell '77 holds unusual potential for continuation of the Grateful Dead legacy. It may function equally serviceably as a starting point for the curious as well as the crowning inclusion to a devoted fan's collection precisely because the undeniable power of the playing has turned the recording into an easily recognizable, multi-faceted symbol of the the group's mythos (though not without some debate).

So, it's not just for the archetypal (slightly garish) color scheme of the mandela-like artwork or because "Not Fade Away" appears near the end of this three hours plus. As has so often been the case at various milestones of Grateful Dead history, this revered archive title constitutes a flash-point of circumstance, the brilliance of which is bound to illuminate and enlighten, past, present and future.