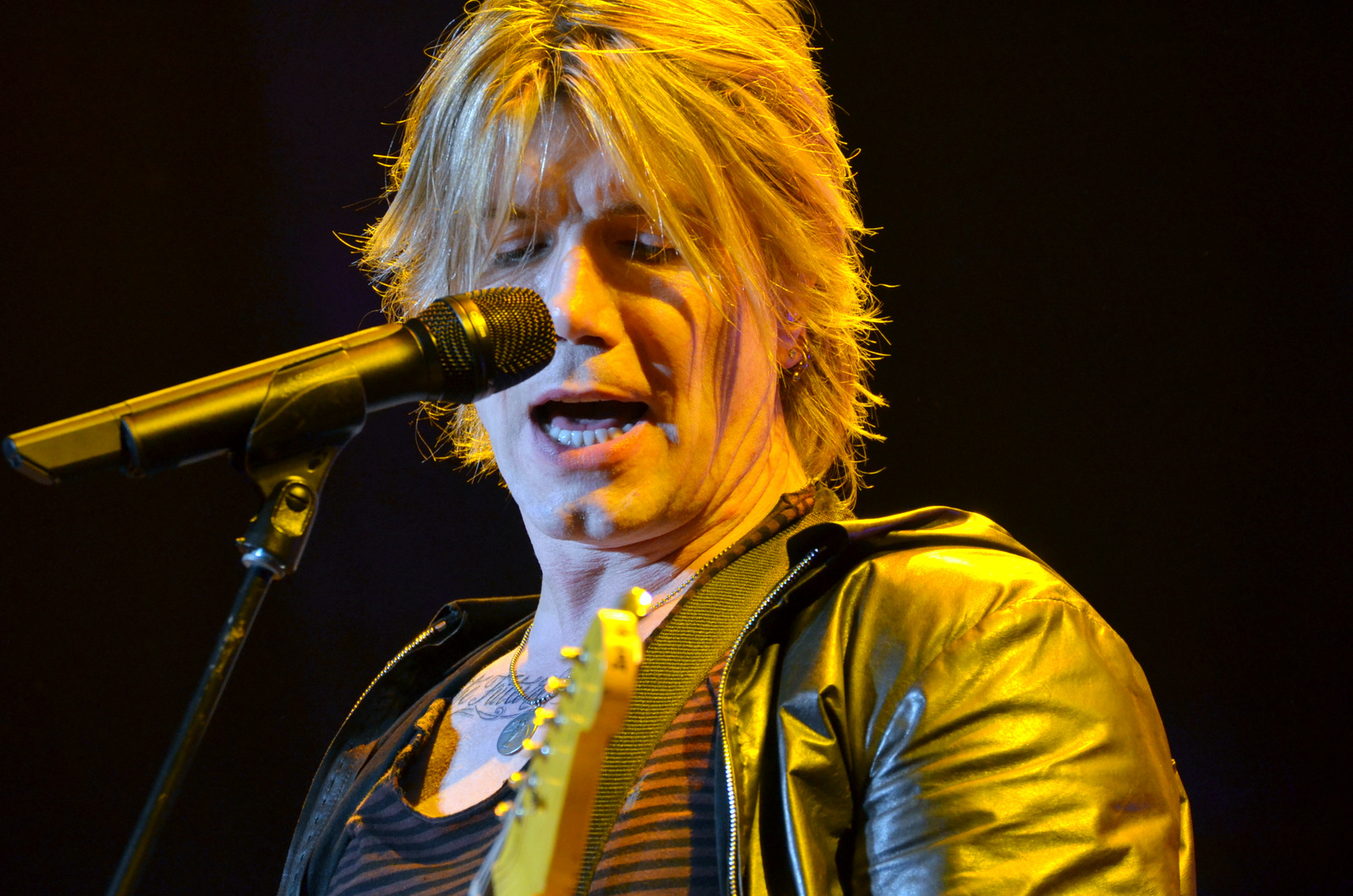 Touring behind 2013's Magnetic release (Warner Bros Records) as well as the iTunes-only released Warner Sound Sessions (Warner Brothers Records, 2014) live EP, the band is down to a twosome, with Johnny Rzeznik (guitar and vocals) and Robby Takac (bass and vocals) soldiering on without longtime drummer Mike Malinin (who left the group earlier in 2014).

On this cool and breezy mid-June evening, Plain White T's led-off with a short but sweet set consisting of a stripped down version of "Hey There Delilah" as well as some of their lesser-known tracks. The band, unfortunately, played to a still filling-up arena. It deserved a better fate as the group's songs feature strong lyrics and excellent instrumentation. The performance was top-notch.

Next up was Daughtry. Though named after its lead singer, Daughtry is a band not just a one-man show. Lead-singer Chris Daughtry stated the same when he introduced the band (Brian Craddock on lead guitar, guitarist Josh Steely, Josh Paul on bass, drummer Robin Diaz and Elvio Fernandes on keyboards. Though many remember Chris Daughtry from his stint during the fifth season of FOX' American Idol TV show, the Chris Daughtry who took the stage on this evening was a more accomplished singer and performer. Unfortunately for Daughtry many remember him specifically for American Idol. What many people forget is that after he was voted off American Idol, Chris Daughtry turned down an offer to be the lead singer of Fuel and set off to create the band, Daughtry. The group's self-titled debut CD was a runaway blockbuster that was just poppy enough to please the American Idol fans and rockin' enough to lure in other members of the music-buying public. The CD, buoyed by the single "It's Not Over," debuted high on the charts and stayed there for months.

At its opening, his set was greeted by an audience consisting (mainly) of the now older young teeny boppers who watched him on television and the FOX program's target female demographic. These fans spent the entire performance on their feet, singing along, dancing and using their phone and iPad minis to take video that will no doubt wind up on YouTube. As the band rocked the mid-sized venue by the bay, the male portion of the audience began to take notice.

Daughtry's (the band) set leaned on its new Baptized release (RCA, 2013) and some of its radio-friendly songs. Its set was full of hits: "Baptized," "Waiting For Superman," "Traitor," "Battleships," "September" and "Feels Like Tonight." Daughtry paid tribute and said, " This goes out to every man and woman who has served and is still serving our country in the military. Thank you so much for everything you do. It gives us the freedom to do what we do. This is called Home." Other highlights included "Over You," "What About Now" and the encore "Long Live Rock And Roll."

After a short intermission, the stage lights came to life, Rzeznik, Takac and their band took center stage and held sway over the, by now filled, sold out arena for the next two hours.
Formed in Buffalo, New York on Memorial Day 1986, the group began life as a garage band/power trio featuring Rzeznik, Takac, and original drummer George Tutuska. Malinin replaced Tutuska in 1995 and sat behind the skins until January 2014.

The group had a humble beginning. With Takac as their lead singer (Rzeznik was too shy to sing), the band released their first album, Goo Goo Dolls in 1987 on Mercenary Records, but was picked up in 1988 by Celluloid Records and eventually Metal Blade Records. The band released its second album Jed in 1989 (Metal Blade Records). In 1990, it released Hold Me Up (Metal Blade Records), on which Rzeznik sang lead on five tracks. The band's first major label release Superstar Car Wash (Warner Brothers Records, 1993), garnered quite a bit of media attention, due in no small part to the track "We Are The Normal" co-written by Rzeznik and Paul Westerberg. In 1995, A Boy Named Goo (Warner Brothers Records/Metal Blade Records) was released and propelled by the singles "Name" and "Flat Top" was certified double platinum by the RIAA. Over the years, the group has released numerous best-selling albums and popular singles including (but not limited to): "Broadway," "Slide," "Black Balloon," "Lazy Eye," "Here Is Gone," "Notbroken," "Dizzy," "Iris" and most recently "Rebel Beat" from Magnetic.

Opening its show with "Lazy Eye" and "Dizzy," followed by "Slide" Rzeznik, Takac and company immediately proved to the Long Island audience that not only had they come to play but that the evening was going to be a fun and upbeat experience. The show shifted gears and decades smoothly as the band glided into "Big Machine" (from the 2002 Warner Brothers Records release Gutterflower) and then to "Rebel Beat."

Rzeznik was in fantastic voice as well as a jovial mood, poking fun at himself when he introduced "Here Is Gone" as being "a depressing song, but we're going to play it anyway...this song is called 'Here Is Gone' and it goes like this." The main concert set took fans through a hits-filled musical history of the band. Other highlights of the performance were "Black Balloon," and a very up-tempo and sing-along version of "Name." Throughout the performance Rzeznik and Takac took turns on lead vocals—the bassist's handling the vocals on a few songs in a row (such as "Bringing on the Light," "January Friend" and "Another Second Time Around") allowing Rzeznik an opportunity to catch his breath, quench his thirst and rest his voice for a few minutes.

The show wound down with note-perfect renditions of "Better Days," the infectious "Broadway" and "Iris." The lights partially dimmed and the band left the stage to a huge standing ovation.

Rzeznik didn't fully leave the stage. He stood on stage right and announced to the lighting crew, "This is the part where you turn off the spotlight." They did (briefly) and soon the rest of the band was back to play the ballad "Sympathy" and the evening's final song "Let Love In."

Midway through "Let Love In," when Rzeznik asked, "Can I hear you Jones Beach? Come on," he was greeted with a huge swell of cheers and applause. Judging from the noise and elevated decibel level, the crowd's cheers could be heard across the parking lot and on the nearby Loop Parkway.