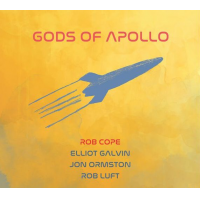 Rob Cope's debut album, the first of a trilogy of space-inspired recordings, celebrates the 50th anniversary of man first setting foot on the Moon on July 20th 1969. It traces the history of spaceflight from the first satellites to the last crewed Moon landing in 1972. Cope began playing saxophone at the age of eight and studied clarinet and saxophone at Manchester's Chetham's School of Music before taking a BMus with First Class Honours at the Royal Northern College of Music, studying saxophone and flute. He then gained a Masters in jazz from the Royal Academy of Music, in London, graduating from there in 2012. He has performed with various orchestras and big bands at some of the UK's major venues including Ronnie Scott's and The Vortex. He teaches music both privately and at several schools.

Very much a "concept" album, Gods Of Apollo is played out like a filmic soundscape. The narrative takes shape utilising various snatches of historic spoken recordings of some of those most closely involved in the American space race for the Moon. "Sputnik," at twelve minutes the longest track on the album, takes a while to get going. Opening with a four-minute soprano solo from Rob Cope, accompanied only by an eerie sonar-like loop, he is gradually joined by the album's three other musicians who provide an angular, sparse backdrop to the serpentine soprano notes. Bridged by Elliot Galvin's searching piano, "Human Spaceflight" segues straight in, colliding with John F. Kennedy's famous "We choose to go to the Moon" speech from September 12, 1962. Galvin's exploratory piano is fascinatingly juxtaposed with the various archival voice recordings, including the ironic words "sounds like outer space type music," which of course it does. Rob Luft's metallic guitar vies for attention with Cope's soprano on the short "Flames" whilst the sudden burst of stereo-mixed voices on "Neil" (preparing for his historic landing) is dramatic and engaging. The title of the title track derives from the words spoken immediately following Neil Armstrong's "One small step for man" speech, when the second man on the Moon, Buzz Aldrin, uttered the lesser known words, "Beautiful, beautiful, magnificent desolation" which are arguably far more poetic. Galvin's captivating piano extemporisation here is equally breathtaking.

At certain points, Luft's reverberating guitar on "One Hell Of A Ride" begins to emulate Jerry Garcia's memorable extended improvisation on the epic "Dark Star" from Grateful Dead's Live/Dead (Warner Bros,1969). Whilst critics might contend that the numerous voices and sounds heard on each track are a distraction, they actually complement the music, positively enhancing it. This methodology is not without precedent either, since Pink Floyd, pioneers of so-called space rock, utilised such innovative sampling on their debut album Piper At The Gates Of Dawn (EMI Columbia, 1967) specifically at the start of the opening track "Astronomy Domine." But Cope's recording career launch hardly falls into that category; it is something far more subtle and therefore nearer to Stockhausen than Syd Barrett, with perhaps a little Sun Ra thrown in for good measure. However you cut it, this is challenging and compelling music, for sure.