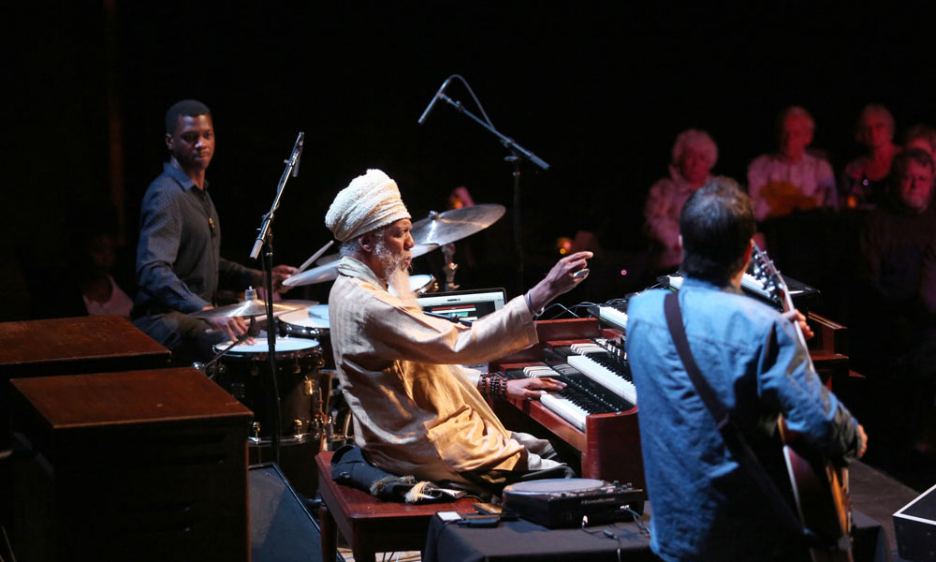 Thursday night is always the second night of the biennial Gilmore Keyboard Festival. Thursday night is also the first night for jazz, the festival putatively a classical music rollout with jazz confections, albeit well-considered, strewn throughout this 22-day cultural jewel based in Kalamazoo but spread throughout Southwest Michigan as well.

For the first of two jazz shows at Bell's Eccentric Cafe (yes, that Bell's, based in Kalamazoo), on the city's trendy, revitalized east side, it was the Christian Sands Trio, featuring Eric Wheeler on bass and (on only his second night with the band) blazing drummerkind Jonathan Barber. Indeed, by second set's end, you'd have thought Baylor was born and bred with a similar musical DNA as Sands and Nakamura, his well-placed, intensely mesmerizing solos threatening to take the spotlight from his boss. Sands, for his part, took it all in stride, so to speak, appearing like a proud papa unveiling this rhythmic sparkplug on this unsuspecting sold-out crowd.

In this, his second appearance at the Gilmore (as a teen, Sands performed at one of the festival's noon series shows in 2012), Sands' trio played a tight, punctuated set, austere in delivery, full of abbreviated up-tempo swinging. Opening with Wayne Shorter's '60s-era classic, "Humpty Dumpty," the trio took the song and made it the malleable piece Shorter no doubt intended it to be, the synthetic melody delivered with an emphasis on execution with much feeling. This was followed by a medium-tempo treatment of Miles Davis' "All Blues," featuring a very conversational Nakamura.

Following some sizzling Cuban material, there was a loss of steam, the music now seemingly all about force, a rollout of talent with no real feeling, the jazz almost mindless and routine. With "Her Song," a piece unlike anything that came before, they played it slow, almost mournfully so, the material much more composed, clearly un-virtuosic in delivery. And then, things become intense once again! only to become quiet, soulful once again, another song ending very quietly. With a slow stride-like intro laced with some lickety-split runs (a feast for keyboard lovers), the trio took it into high gear for a characteristically brisk sprint through "Cherokee." Again, though, the band ended up sounding perfunctory, the song played as mere routine, with a show-biz sheen. With loads of exertion, and despite an ending swinging soliloquy, this "Cherokee" was a train wreck.

Thursday night was followed by Sunday evening, the Bill Charlap Trio playing the second of two sets at the Williams Theatre Jazz Club on the campus of Western Michigan University. Last performing at the Gilmore Keyboard Festival in 2004, Charlap's group offered a return of sorts to material recorded for the trio's salute to one of America's greatest 20th-century composers, Somewhere: The Songs of Leonard Bernstein. For this adult-plus full house, the music played likely stirred memories of days gone by, Charlap and his bandmates of 21 years, bassist Peter Washington and drummer Kenny Washington, delivering intelligent, swinging and heartfelt renditions of songs taken from Broadway most often.

A medium-tempo "America," from West Side Story, kicked things off, the tune's Latin flair embossed by bassist Washington's driving ostinatos and the trio's vamping groove. Charlap's playing featured lots of flourishes amid some dandy reharmonizing, the song ending in a curious suspension. The band's revisit to Somewhere continued with their gracious, slow-swinging take on "Lucky To Be Me," from On The Town, the tune laced with a boatload of rich chords from Charlap, while "It's Love" was played as an up-tempo swinger with bop flourishes.

In what was one of two deeply moving pieces, "Lonely Town" once again featured Washington's bass playing, an intelligent counterpoint to the pianist's own way with this sweet, melancholic melody. A typically slow ballad, the band picked up the tempo slightly towards song's end, drummer Washington's brushwork enhancing the trio's tight interplay, Charlap adding some bluesy touches as they returned to "Lonely Town"'s original slow gait.

By this point, it was clear that this Gilmore audience remained not only attentive but actively so, the line between band and listener slowly dissolving.

"I Feel Pretty" was next, their rendition featuring alternating lively tempos in 3/4 and 4/4, naturally swinging all the while. Charlap's stride side emerged with "Big Stuff," his slow solo piano introduction quiet, meditative, ruminative, the music eventually slinking into some more trio swing. Not so much an improvisor but an interpreter with his own style, Charlap's sound seemed immersed in Bernstein's music. It's a sound that identifies Charlap the interpreter's voice. "Big Stuff" ended up being bluesy, funky, served at a crawling pace. A visit to "Glitter And Be Gay," from Candide, was followed by "Jump," a showcase for Washington's more fiery side, his solo focused primarily on his snare drum, the overall feeling explosive, the audience eventually clapping along in encouragement.

"Somewhere" was given a typically lyrical treatment en route to more fireworks with the "Be Cool" medley also from West Side Story, Charlap at times appearing to be immersed if not lost in the labyrinth of the music's various twists and turns. Closing out the show, Charlap introduced "Some Other Time," again from On The Town, as his "favorite." With no real soloing, this other deeply moving piece was just excellent group interplay, an execution of simple expression in the wake of so much otherwise "cool" fanfare.

The following morning, Charlap held a master class at Western. Featured were three music students, whom Charlap listened to, critiqued and complimented. It was an opportunity to see and hear as he took to a second piano for illustration and emphasis, the side of the artist as educator, communicating his ideas on composition, improvisation and the history of the jazz piano. Always the attentive listener, Charlap's feedback remained instructive, if not totally supportive of each student.

An engaged audience was treated to well-played (and tweaked) renditions of Gershwin's "They Can't Take That Away From Me," a Bud Powell classic from the bebop era and the standard "If I Should Lose You" by Ralph Rainger, Charlap unpacking each song, discussing such topics as the song's emphases, nuances and colors. He talked of "the drummer inside your head," stressing the importance of rhythm, and quoting a favorite of Charlap's, pianist Kenny Baron, who instructed that one should "think like a tap dancer."

And, of course, there was, of vital necessity, the appreciation and knowledge of the lyrics, of which Charlap had this to say, quoting friend and legendary lyricist Alan Bergman: "The lyrics should drip off the notes as the notes drip off the lyrics." Needless to say, the hour flew by, Charlap hanging till the bitter end, making the most of the occasion before rushing to catch his flight back home to New York City.

In the second of two Sunday shows at the Williams Theatre, organ great Dr. Lonnie Smith brought his trio on May 6th. Smith's monstrous touch on the Hammond B-3 was not so much in evidence as the supporting role he played behind featured soloist guitarist Jonathan Kreisberg, complemented by the sympathetic drumming of Xavier Breaker.

In fact, it was Breaker who opened the group's second set with what felt like a kind of meditation with sticks on drums before the gradual emergence with all three playing a medium-tempo rolling samba that led into a slow, rangy ballad of sorts. With Breaker now using brushes, the music seemed to be performed as a medley as it continued to change form, now built around six passing chords as the rhythm shifted into a strolling, medium-tempo swing groove.

Positioned center stage with Kreisberg to his right, Breaker to his left, Smith and his keyboard arsenal faced this full room head-on, his long white beard and customary turban adding to his slightly other-worldly stage presence.

Eventually ending their opening portion of the show, and after introductions, the group went on to play Paul Simon's "Fifty Ways to Leave Your Lover." Back in the groove, it was a similar tempo that carried them along, Simon's ode to love lost and left performed as the '70s-era soul funk tune it seemed predestined to be. Smith's organ, supplying the volume, heat and overall sound, ground out the melody while Kreisberg wailed away on guitar. A long, winding introduction to The Sound Of Music's "My Favorite Things" turned into an up-tempo waltz featuring explosive climaxes alternating with the slow, meditative and propulsive march the popular song's noted for. Lyrically very musical, Kreisberg's guitar led the way with what ultimately became a quiet, pensive, almost melancholic treatment full of blues feeling, guitar runs and organ washes, Smith's organ sounding like a dying horn section.

Smith's organ, from tune to tune providing each song's theme statement, proved to be at the heart of this concert. A restive yet peaceful sound pervading his touch, Smith, never a virtuoso, was ever the mood-setter. And with the program's longest piece which followed leading us home, this mostly button-downed establishment crowd appeared to be subject to a ripe display of trance music, with incantations and a smooth, easeful ending that sidestepped any hint of a climax. A lively dance from the 75-year-old Smith followed, his wandering the stage and among the tables aided by an electronic wand that served as a keyboard controller with supersonic sounds that kept audience members on the edge of their seats.

Returning to the stage and positioned once again behind his main axe, it was time to play it sweet and slow, the Doctor telling the assembled with a sly grin, "Gonna play something nice and easy so you can sleep tonight." The tune was a very rare cover of Charles Mingus' ode to his idol, "Duke Ellington's Sound of Love." With Breaker back on brushes, and Kreisberg limning the song's gorgeous melodic contours, Smith took advantage of his keyboard dynamics, emphasizing the bass pedals, with not a little syrup, and a few climaxes.

From an organ trio to the more conventional piano trio, the Gilmore series of noonday concerts proceeded the next day at the downtown Civic Theater. (Alternating weekday shows took place in neighboring Battle Creek in a room at the Kellogg Foundation.) Monday's concert was the Emmet Cohen Trio, featuring bassist Russell Hall and drummer Evan Sherman. Evoking the spirits of John Lewis, Red Garland and Ahmad Jamal, Cohen's combination of a light touch with occasional flourishes worked well with his highly intuitive bandmates. Starting things off with a bouncing, bluesy "Opus One" by Sy Oliver, the standard "All Of You" extended the drive with a lot of walking bass and some stride style coming from Cohen. Jobim's bossa nova "Triste" mixed things up slightly, the band ending this all-standards program with a tap-dancing rearrangement of "Darn That Dream." As novelties came with their brash blend of dynamics with unconventional song endings, the music more often than not was played as if it were clay in the hands of a potter.